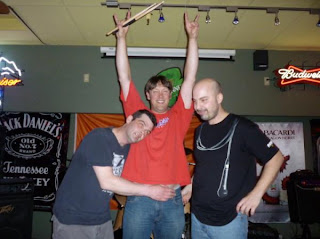 Hillbilly Jesus is a Puget Sound rock trio that mixes blues, rock and country in an explosive blend that has raised their profile in their home market. Forming in November of 2009, Hillbilly Jesus took six months to rehearse, write and record their debut EP, Really?!?

Really?!? opens with Bloom, a benign, somewhat suppressed rocker that holds hints at a Black Crows influence but has been a bit too refined in the recording/production process for its own good. "Open Wide" gives much the same impression, of a song that wants to open up and be loud and bawdy, but it never gets there on Really?!?. There's certain a nasty-enough riff at the heart of the song, and the sound suggests a loud, blues-tinged live sound, but that sound is pushed way back in the can for the EP. Hillbilly Jesus closes with "Say Goodbye", a slower-paced "ballad" that hints even more strongly at a Black Crowes influence mixed with some Pearl Jam, but again the sound on Really?!? makes Hillbilly Jesus sound repressed.

The three songs on Really?!? are decent enough; nothing earth-shattering but all three songs are solid. What hurts Hillbilly Jesus is the presentation of the songs on the EP. The first two songs in particular scream for a bigger dynamic, and even "Say Goodbye" sounds like it's been hemmed in. While simplicity is often key in rock music, there's nothing wrong with going big with your sound when the song(s) call for it. Really?!? just sounds too clean.

Rating: 2.5 Stars (Out of 5)
Learn more about Hillbilly Jesus at www.msyspace.com/hillbillujesus.  Reallt?!? does not appear in any identifiable online outlets, but you can stream the songs on the Hillbilly Jesus MySpace page,
Posted by Wildy at 5:00 AM