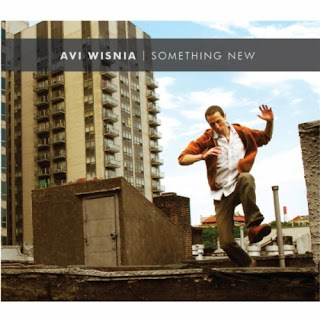 Avi Wisnia invites attempts to classify him even as his music defies clear description: Elements of pop, jazz, Latin and cabaret gallivant through his songs with seeming abandon. The award-winning singer/songwriter splits his time between New York City and Philadelphia while creating music that seems to jump out and grab you. Wisnia's influences include Ben Folds, Norah Jones, Billy Joel, Jamie Cullum, John Legend and Chet Baker, and that deep musical heritage makes its presence known on Wisnia's latest album, Something New.

Wisnia opens with "New Year", a catchy, piano-driven pop song about hope. "More Than Me" shows Wisnia is a sort of post-modern Barry Manilow. "More Than Me" is catchy light pop with a nice melody that would be right at home in a Manilow set. "I Wish That I Could Stop Writing Songs About You" is melancholy and lovelorn; a song Wisnia wrote about an ex-boyfriend. Catchy and contemplative, the song has a melody that nearly sings itself. Latin rhythms find their way into "Sink", punctuating the catchy, light acoustic-pop number with a mildly danceable feel.

Wisnia's cover of The Cure's "Love Song" has a vaguely soulful feel, undercut by a melancholy sense of longing that is detached yet very much alive. "Rabbit Hole" is the most relaxed track on the album. Wisnia gets a bit sloppy on the vocal line, trying to do too much with flourish in what should be a purely entertaining track but gets smothered when Wisnia hams it up a bit too much. "Something New" is a somewhat cheesy series of vignettes in one song that borrows lines from popular songs; it's fast-paced and entertaining but seems a bit trite. "It's Only Me" could become a signature song for Wisnia; a piano ballad about the loneliness of creation when trying to reach out across a gulf to those who will listen. Wisnia closes with a cover of TLC's "No Scrubs" in pure Las Vegas fashion, hamming it up Rat Pack style. It's campy but entertaining.

Avi Wisnia has a definable pop sensibility that he weaves in and out of his pop/jazz/Latin creations. Something New seems likely to make Wisnia a host of new fans. How marketable the sound turns out to be can turn on the social whims (or winds) of the moment, but Wisnia definitely has slick pop touch that he glazes over each song. From a songwriting perspective, Something New is up and down, but when Wisnia is on his game he can be very entertaining. Vocally Wisnia is competent; his isn't a voice that will make a huge impression, but he uses it well within the context of his songs.

Learn more about Avi Wisnia at http://www.aviwisnia.com/ or www.myspace.com/aviwisniapresents.  Something New is available from Amazon.com as either a CD

.  Digital copies are also available from iTunes.
Posted by Wildy at 6:28 AM

I don't know man, I just heard this guy at Yoshi's in SF, and he was seriously fresh, so I grabbed his CD. I came online looking to see if other people had heard of him and found your review -- I gotta say, I'm not really on board with you -- this guy is an incredible musician and really entertaining live.

Post-modern Manilow makes him sound like someone who writes cheesy, catchy songs with a cynical edge. That's not what I'm hearing, and while I have much respect for Manilow's pop sensibility, dropping a name like that is not going to be helpful to people who want to know what he actually sounds like.

My favorite songs were "Sink" and "It's Only Me." I've never heard a song quite like Sink -- there's a toy piano, acoustic guitar, bossa rhythm, hand clapping, a chorus of maybe his friends singing, and some seriously tricky syncopation.

Where was the slop on Rabbit Hole? And where are the "downs" on the song writing? "More Than Me" isn't too creative, but it's still a solid song, and "Rabbit Hole" is pretty straight up kitsch, but the lyrics are mad clever, and saying he hams it up a "bit too much" -- I mean, come on, he's just having fun, and the audience fucking loved it.

The title track, "Something New" is anything but cheesy! This makes me think that when you put the words "Manilow" and "postmodern" together you actually have no idea what you're talking about! If anything, this is the postmodern song, a metacritique of formulaic pop but with an approving wink both to the songwriters and the listener.

I just feel like you didn't give this album a good listen. People want to know what the album is going to feel like after a few listens -- not your initial reactions to it after what seems like listening to it while you were on the phone.

The great thing about music is that everyone has a different perspective. The live experience is much different than the album. If you see someone live first and then hear the album, what you hear will always be colored by what you heard live. So I respect your opinion. Have a great day!

I agree that hearing him live will color my opinion -- but so will giving his album multiple listens, as I'm totally addicted!

It can't work in reality, that is exactly what I suppose.