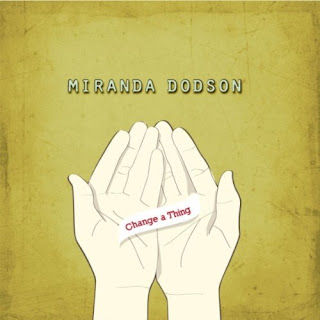 Austin, Texas singer/songwriter has an amazing voice, but she wins listeners over with her heart. Pouring herself completely into every song, Dodson seems to have a talent for placing herself in the moment of the song, bringing to life the people, places and events about which she sings. After three self-produced releases, Dodson set her sights on her first full length album for 2010. Working with producer Robert Harrison (Future Clouds, Radar), Dodson updated her folk sound to include elements of rock and pop on Change A Thing.

Dodson opens with "Too Lat"e, a subtle pop tune that features Dodson vocalizing in a mild soul style. Dodson's voice has a bit of an edge here, but it can't hide the gorgeous tone with which she sings. "Slow Motion" takes on a gentle country flavor, and Dodson's voice opens a bit to reveal a richer voice than even appeared on the opening track. "Home" is a heartfelt and emotional number about finding your place and then getting there. Dodson shows her ability to really become the song here, pouring tremendous emotion into the song without over-playing her hand.

Dodson shows off a quirky side to her songwriting with "Sitting In Limbo", hitting listeners with a quiet catchiness that will sneak up on you. It's the highlight of the album; a tremendous bit of song craft. "Prodigal" seems to reflect the difficult of being the favorite son or daughter, particularly when things go wrong. Dodson's treatment of the subject is subtle and indirect, masking the emotions that drive the conversation. "King" is a cute little daydream in song with a warm and heartfelt vocal line you're certain to like. Over the last three songs Dodson gets out her alternative musical thoughts. "I Will Be Free" is interesting but may be a tough connection for many listeners. "Fly" is eminently complex for someone in the folk/rock genre, perhaps a sign of more ambitious attempts to come down the line. Dodson closes with the brief but heartwarming "Never Be The Same", a loving message from mother to child that any mom listening in can't help but recognize.

Miranda Dodson doesn't hit you over the head with her thoughts and musical ideas. Her voice will garner a lot of attention, but Dodson prefers the subtle approach as a songwriter, building up the song just enough to get you interested, but keeping her distance just a tad so that you come to her. This trick is a subtle and powerful one for any performer to maintain, particularly while pouring your heart and soul into the performance. The few who have this ability seem to be innate and I doubt Dodson is the exception. It's a gift that Dodson is willing to share, and on Change A Thing she shares in abundance.

Learn more about Miranda Dodson at http://www.mirandadodson.com/ or www.myspace.com/mirandadodsonmusic.  Change A Thing is available from Amazon.com as both a CD

.  Change A Thing can also be purchased as a download from iTunes.
Posted by Wildy at 5:00 AM