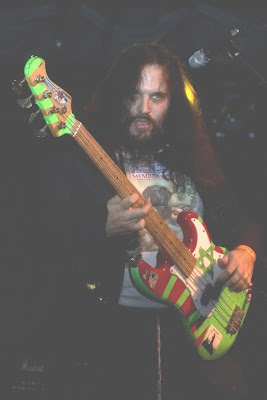 Steve Lieberman, AKA The Gangsta Rabbi is at it again with his 18th album, his second for JDub Records, Jewish Engineer 18. The post-punk, flute-toting Jewish street poet and songwriter continues down the path he's been on for a number of years now; a bi-polar political diatribe against all that doesn't make sense in the world.

Like Lieberman's other albums, it's hit or miss whether you'll understand the lyrics. Lieberman's rants are conducted in sing-song fashion over his highly distorted bass guitar and percussion with Ian Anderson-like flute fills dotting the musical landscape. The result is surreal and fun, particularly when Lieberman works up an angry head of steam over some social injustice or simple act of human stupidity. Lieberman's social observations ("400 Pound Cop", "Garbage Truck", "The Double Clutch") can be as funny as his political ones ("Riot At The Tax Lien Sale", "Life Crisis Man-Machine", "The PBA"). But Lieberman saves his full ire for religious considerations ("Preach The Deuteronomy"), while also acclaiming his own faith ("Cool To Be Hebrew"). Lieberman's best moments come in moments of pique, ("Poor Man's Matisyahu", "I Want A Bass With A Whammy Bar").

Some folks are going to find Lieberman difficult to impossible to listen to, and I'll admit he's an acquired taste. Lieberman rests somewhere between Gibby Haynes and Wesley Willis on the depth chart. His insights come from left-center field, driven by the Bipolar disorder he deals with every day and from years living in a city where poverty and luxury often live across the street from one another. The Gangsta Rabbi knows both sides of the street and speaks from the heart for all of those who will listen. If the music on Jewish Engineer 18 is tempered in hues you could never imagine, then so much the better.

Learn more about Steve Lieberman at http://www.gangstarabbi.com/ or www.myspace.com/gangstarabbi.   Jewish Engineer 18 does not appear to be commercially available yet.  Keep an eye on Lieberman's website for availability.
Posted by Wildy at 5:00 AM