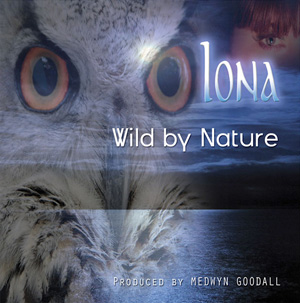 While born in Sydney, Australia, Iona Leigh grew up in the Scottish highlands, listening to her mother's new age music collection while living in spiritually communal eco-village. With comparisons to artists such as Loreena McKennitt and Deva Premal, Leigh is establishing herself as a significant new voice in new age music. Iona's most recent album, Wild By Nature, was produced by the legendary Medwyn Goodall and released on his MG Music Ltd. label during the spring of 2010. Leigh performs all vocals on the album and Goodall does everything else.

Wild By Nature opens with "Nature's Lament", featuring the poetry of William Wordsworth. Leigh's vocal line is gorgeous and Goodall's arrangement is brilliant, but at 7:38 the song does drone on a bit. "Elemental Spirits" has more of a new age/pop feel; it's a ballad to creation in its most primal forms from a spiritual perspective. The chorus works well, although the verses are a bit locked into form and repetitive. "Here And Now" is a gentle statement of metaphysical being; a declaration of being prepared to enjoy life's experiences in their fullest measure. It's a pretty song absent tension or contrast.

Leigh pays tribute to a British warrior-queen with "Queen Boadicea", recounting in artful terms the historical figure who led an uprising against the Roman army in 60-61 AD that led to Rome temporarily evacuating Britain. Leigh certainly owes some of her atmospherics here to Enya with a pop arrangement that sticks close to her new age roots. Leigh creates a musical mural of earth in naturalist terms with "Colour Of The Earth" recounting the seasons and creatures that make up the world as a series of interconnected thoughts. The arrangement and melody are pretty, and the passive narrative is contemplative in nature. The lack of a prime motivation or mover in the song may lose some listeners, however. "Visions For Life" encourages the sort of inner peace to be found in visions and dreams. It's something of a new age "Imagine" as done by Enya or Loreena McKennitt rather than Lennon.

Iona Leigh finds something like an edge on "Banish The Storm" in a gently volatile melody with dark undertones. It's by far the most intriguing melody and arrangement on the album and Leigh is inspired to open her voice up a bit more than normal here. "Banish The Storm" carries a positive message, but delivers it without the saccharine coating that often pervades new age music and philosophy. "Eyes Of The Soul" is a sweet love song that dances liberally on the border of cliché (and crosses the boundary once or twice). It's a sweet number that is perhaps a bit too gentle to make it as a pop ballad but has all the necessary elements lyrically and melodically. "Ocean Of Dreams" borrows from the Brookstone sound catalog at opening but subsides into a musical whitewash of synthesizer sounds beneath the comely voice of Iona Leigh. Leigh invests the song with a sense of peace that pervades the album as a whole even while the energy of the song seems stuck on auto at times. Wild By Nature closes with the Gregorian Chant-like "Prayer For Trees", an ethereal and lovely tune that's more of a prayer of thanks to trees than for them. It's Leigh's most affecting vocal performance of the album.

Iona Leigh certainly has the voice to be a major player in new age music. I don't believe there's anyone out there who will question Medwyn Goodall's credentials when it comes to new age music either. Together they create pretty works that sound great but lack any real spice or zeal. Leigh's voice is lovely, but that beauty comes at the price of lacking zest or zeal in the performance. It's not a question of whether such things are there, but whether anyone listening at home can tell. Likewise, Goodall's arrangements are beautiful, but the chemistry that one presumes brought Leigh and Goodall together to write and perform Wild By Nature just doesn't translate on the album. Perhaps it shows up live, but it's apparent that Goodall was two involved in the creation of the album to hear it clearly as a producer. What could be striking is merely pretty; what could be dynamic is rendered plain.

Learn more about Iona Leigh at http://www.ionaleigh.com/ or www.myspace.com/ionaleighmusic.  As of publication of this review, the only online outlet to purchase Wild By Nature is directly from Iona Leigh at her web store.
Posted by Wildy at 5:10 AM