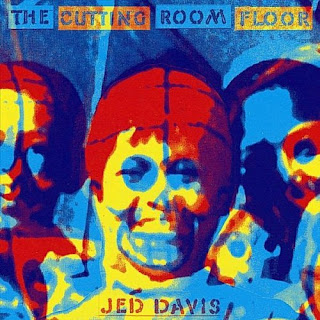 Longtime New York City singer/songwriter Jed Davis fled to Albany to write and record his most recent album, The Cutting Room Floor, which will finally see the light of day on September 21, 2010. Begun back in the dark days of 1999, The Cutting Room Floor was completed in 2006. Davis claims the album was doomed from the beginning, but some big names got involved and helped make it happen. T. Erdelyi (Tommy of the Ramones) helped produce some tracks, Brian Dewan (They Might Be Giants) pitched in for instrumental support and Tony Doogan (Belle And Sebastian) mixed all under the guiding hand of executive producer Dave Fridmann (Flaming Lips/MGMT).

Jed Davis shows the anger and vitality of Ben Folds on The Cutting Room Floor, but comes from a darker place. Where early Folds displayed the anger of the oppressed suburbanite, Davis borders on the sort of disaffected sociopathy of suburbia that is the sociological progeny of cynicism. The Cutting Room Floor opens with the title track, sounding like the opening number to an off-off-Broadway production about the angst and loneliness of living in the modern age. Disaffection and separation from those around you are the driving forces here, where hermitage is the ultimate end of interconnectedness. "Before I Was Born" starts out with the opening of Bill Withers' "Lean On Me" played on an out-of-tune piano before opening into a vibrant garage rock tune that bemoans genetic pre-destination. It's a great tune with real punker energy in the chorus and is incredibly catchy. "Enough" is a catchy reminiscence of youth centered on the eye opening experiences that peers provide, much to the chagrin of parents. If Davis finds a way to make a song any catchier the CDC would have to get involved.

"Let Go" is the anthem of the eternal skeptic. It's an interesting tune, but would have been better off if Davis has omitted the distortion effect in the vocal line. "Denny's 3 A.M." is nominally a celebration of Denny's status as an all-night hangout, but is really a celebration of the idle time of youth and the magic that can happen while the rest of the world sleeps. Energetic and eclectic, the song sounds like something that might happen at an after-hours jam session involving Weezer and They Might Be Giants. "Interesting Times" is an angry diatribe about suburban life and the transition from youth to adulthood. Hope is lost here, but the music is great. On "Native Son", Davis sticks his thumb in the eye of every hometown acquaintance who failed to notice him during high school but now acts like his best friend when he returns home. The appeal of this tune is universal, and the angry tone that Davis strikes is both convincing and amusing. Davis winds down with "Queens Is Where You Go When You're Dead", a well-written pop/rock tune that's not likely going to a big hit in Flushing. Davis gets in his last licks with an untitled track that features some 3:00 AM conversation and a version of "Denny's 3 A.M." with a host of guest vocalists.

Jed Davis might not be for everyone, but it'd be hard to not find something to like on The Cutting Room Floor. The reference to things that have been left behind may be appropriate considering the time it's taken this album to come to light. But Davis proves that just because something is initially rejected or put away doesn't mean it has no value. One could argue that The Cutting Room Floor will become known as Davis' best and most vibrant work to date.

Learn more about Jed Davis at http://www.jeddavis.com/ or www.myspace.com/jeddavis.  The Cutting Room Floor is available from Amazon.com as a CD

.  The Cutting Room Floor is also available from iTunes.
Posted by Wildy at 6:03 AM