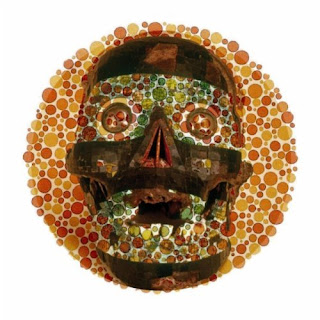 The National Rifle drops their fourth EP in four years on August 31, 2010. Vanity Press shows the same manic pursuit of musical growth that has come to characterize The National Rifle's previous releases. With songwriting born of the boredom of the daily grind of an office job, The National Rifle take out their work-a-day frustrations in instruments and voice on five dynamic rock songs that don't stand still stylistically, sometimes even within the frame of a given song.

Vanity Press opens with "In The Weeds", an incredibly catchy concoction of garage, alternative and roots rock that pushes a relentless stream of sounds at you in accordance with vocalist Hugh's vocal line. The National Rife seems to adopt a hybrid jazz form that serves as the basis of some prog rock construction in the process, sewing pieces together in a fashion that makes more sense as a complete song than it may in the moment. "She's A Waste" mixes the frenetic energy of early Police recordings and the southwest alt-rock of The Refreshments. It's a catchy but restless tune that suffers at times for its introspective turns but quickly recovers. "Jazz History Of The World" seems to take on the universal angst of a generation staring a declining standard of living in the face, complete with a neat Tears For Fears breakdown in the middle. "Same Sh!t Different Desk" takes on a much harder rock sound delivered in a driven acoustic arrangement; a highly entertaining tune that dances on the edge of madness while inspiring dancing and singing along. Vanity Press closes with "Too Much T.V.", a messy but enjoyable song that is vaguely reminiscent of the sound of Rusted Root (without quite so many drums).

The National Rifle makes music for all the right reasons, and there is a simple joy that shines through even the occasional indications of angst on Vanity Press. The National Rifle would build a street corner in the middle of a desert if it would give them a place to play. Their sound isn't the sort to exact much excitement from commercial radio, but this sort of energy, attitude and enjoyment of the artist is infectious. Vanity Press is very much worth your time and attention, and if The National Rifle gets anywhere within an hour's drive of you, make the trip.

This band is a down to earth, wonderful, energetic...and that is putting it mildly, band that goes out of their way to please all of their fans. I fell in love with their music a year ago when I caught their show at Poor David's Pub in Dallas, Texas. They love their fans, they dance with them and they spend time with them both after shows and on-line with them. Their music is comes straight from the heart and they are good, honest people. Won't miss a show that I can possibly make.