Horse Opera - Sounds Of The Desert 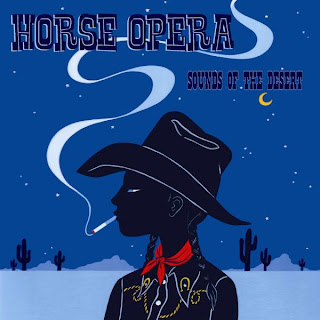 Horse Opera formed in Austin, Texas in 2005 behind front man Jimmy Deveny. Built of graduates of the schools of rock, punk and rockabilly, Horse Opera draw their influences from Hank Williams Sr., Johnny Cash, Waylon Jennings and Elvis Costello and The Beatles. Sounds Of The Desert, Horse Opera's debut studio album reflects a band steeped in the traditions of 1950's and 1960's country music while exploring the dark underbelly of human behavior.

Sounds Of The Desert opens with "Save My Tears", a delicious bit of classic country with an early rock feel. It's an incredibly catchy tune with solid instrumental work in the background. Deveny has a highly pleasant voice and his delivery is nice and easy. "East Bound Train" is a mid-tempo instant classic about running away from heartbreak. "3 To Closing" is a catchy tune about liquid courage and good intentions mixed with a lack of motivation; the diatribe of a big talker that's done with cute touches of humor. "Devil You Love Best" is a catchy and danceable number that will stick with you.

Horse Opera takes on classic western theme song styles with "Spaghetti Mess", a fun tribute that lives up to its name in fine style. "Sorry" could have come off the AM Country airwaves of the 1950's; a reluctant love song that could be a small hit in most any generation. "2 AM" is a song about friends whose elbows rest on the same bar; a song of shared delusions, pain and efforts to get by. The song has a classic sound and feel. Horse Opera closes with "Best Day", bringing in a rock n roll feel to mix with classic country sound.

Sounds Of The Desert is one of those albums that sounds great and will not fail to please while you're listening to it. It's not a standout album; not the sort you seek out but which you're happy to listen to if it happens to be playing. Fans of 1950's and 1960's country music may be a bit more enthusiastic, but modern country fans will probably miss this one. It's a shame, because the instrumental work on Sounds Of The Desert is first class, and Deveny is an affable front man. Horse Opera is good; good enough to keep you listening, but this album isn't quite the wow it could have been.

Learn more about Horse Opera at http://www.horseopramusic.com/ or www.myspace.com/horseoperatx.  Sounds Of The Desert is available as both a CD and Download through Horse Opera's webstore.
Posted by Wildy at 6:08 AM