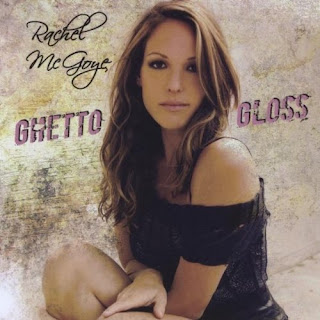 Rachel McGoye is a small-town Florida girl who made her way to Los Angeles by way of the Berklee College Of Music. Miscalculated relationships, jobs waiting tables and oft-stolen bicycles dotted McGoye’s path, but she emerged with her impressive sophomore album Beautiful Disaster in 2008. McGoye’s fourth release, an EP entitled Ghetto Gloss, is scheduled for release on August 31, 2010 (although it appears to be already available on both Amazon and iTunes). The EP is an impressive step forward for McGoye, raising her stylish songwriting a notch while maintaining the same pop sensibility and propensity for catchy melodies.

McGoye opens with "Ghetto Gloss", a positive statement of self that could turn out to be anthem for young ladies all over. Don't be surprised if this song ends up as the theme song for a reality series about instilling young women with confidence and a sense of self. "Love Me Good" is a pop-oriented love song that's almost Top-40 material. The arrangement here is perhaps a bit tame and folk-rooted to really make it on commercial radio, but the song is certainly good enough. Re-imagine this in a slicker arrangement and McGoye has a major hit on her hands. Which doesn't change the fact that the version McGoye put out is probably better than one that would ascend the charts, and truer to McGoye's muse. "Love Seed" finds McGoye fighting for a relationship that's perhaps lost its initial luster but fulfills her. It's a mature love song that sees beyond infatuation into the day-to-day struggle even the best of relationships can be. Once again McGoye eschews pure commerciality for an honest, appealing arrangement that has its own commercial appeal. Ghetto Gloss closes with "Oh My, My", a song with a more pop/dance orientation that keeps to McGoye's folk/pop sensibility. It might be the catchiest song on the EP for radio purposes and is very well-written; a song of moving on written in positive, self-focused terms.

Rachel McGoye charms with her silky alto on Ghetto Gloss, offering up a distinct folk/pop sound that stays true to her acoustic style but brings in elements of pop and even dance music for sound that, if not original, is highly appealing in its freshness. Add to that top-notch songwriting and a deft touch for delivery, and McGoye has a real winner on her hands with Ghetto Gloss. It will not be at all surprising if at least one of these songs breaks big for McGoye, as she shows all the components of being a star on Ghetto Gloss.

Learn more about Rachel McGoye at http://www.rachelmcgoye.com/ or www.myspace.com/rachelmcgoye.  Ghetto Gloss drops August 31, 2010, although it appears already be available on Amazon.com as both a CD