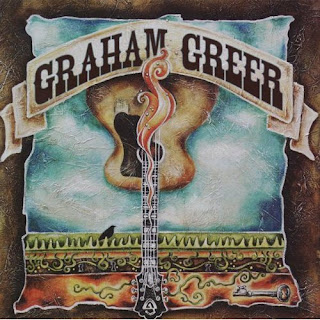 Graham Greer (sometimes know as Moonlight Graham) may be more familiar to Canadian (and some American) music fans as the lead singer of the Barstool Prophets, who briefly came to international acclaim when their song “Paranoia” was included in the soundtrack of Rebecca DeMornay/Antonio Banderas film Never Talk To Strangers. The Barstool Prophets went their own ways in 1999, and Greer learned the trade of a mechanic for a time, but couldn’t stay away from music. Recording as Moonlight Graham, Greer released an album entitled Palookaville in 2003. It took six years and music files crossing the continent many times, but Greer returned as himself in 2009 with the eponymous Graham Greer, featuring new directions and maturity in songwriting and sound.

Greer opens with "Buttercup", a song that could be a personal message or a song to groupies in general. It's a great message laced with a bit of self-respect and humor and is catchy enough to be a hit. "Get It While It's Hot" is a song about the human tendency to confuse what we want with what we need. It's incredibly catchy rock n roll you can dance to with a message worth hearing. On "Face The Future" Greer takes up the environmentalist banner, chiding all who will listen for their blindness to the effects they have on the world around them. "Wire Walker" is a reminder that life is best run one step at a time, and sounds like something Marc Cohn might have written if he played guitar instead of piano.

"Bring Me Fire" could be a call for succor, but is most likely a call for passion and love. Greer writes great poetry here and marries it to a memorable arrangement, calling up a generous mix of needfulness, humility and chutzpah that is guaranteed to grab your attention. "Lovesong" is an over-the-top, angry blues/rock song that is catchy and reproachful at the same time. "You're The One" is a great rock n roll love song, a brilliant bit of songwriting that you won't be able to get out of your head. "Go" is an emotional song of goodbye, based in the belief that there is a life after this one. It's a particularly powerful tune if you've suffered a recent loss and will hit hard, but might also serve to remind of the light that sometimes hides within darkness.

Graham Greer is a compelling songwriter, mixing amazing lyrics with perfectly crafted arrangements, raising his songs to the level of art without the pretension that label brings. Greer would likely deny this all. I suspect he'd tell you he just tells stories in song, and it's true. But occasionally someone comes along who raises that effort up a notch. Graham Greer is one such artist.

Learn more about Graham Greer at http://www.grahamgreer.com/.  Graham Greer is available on CD from IndiePool.  Digital versions of the album can be had from Amazon.com

Great review. I think you nailed it when you say he is a great storyteller.

Gotta say I prefer his first album , cause I think its more eclectic and fits my moody personality better.

Nevertheless, this new album is awesome, very solid, well written and perfectly executed. "Bring Me Fire" is my favorite.

Amazing review! I keep playing this CD over and over; it has so many great tunes and none of them ever get tired. I loved Palookaville, and I love this one!
By the way, he's a great live act too.

First album was good, Like this one better, seems to me he has settled back to his roots of the storey teller. What I like about Graham Live is his energy and Passion. I can go on and on glad he is our little Cornwall secret I am forever blasting the cd in the car and at home Keep up the good work and Thanks

I always love when I can find a storyteller who marries words to music I want to listen to over and over.

Greer's live shows (either solo or as part of his band) are not to be missed as he pairs the music with witty banter that sometimes comes close to stealing the show.

Can't wait to see what comes next (and I hope we don't have to wait so long this time)!

I couldn't agree with you more.Excellent review.I love this music which I bought from Itunes.