All Over Everywhere - Inner Firmaments Decay 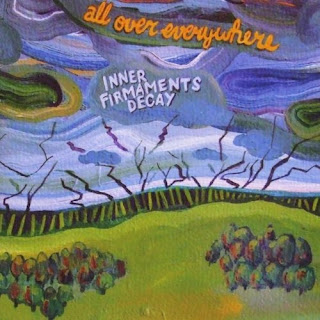 College Park, Maryland is the home to the baroque folk/prog collective known as All Over Everywhere. Formed from a meeting of Trinna Kesner and Dan Britton in 2007 at an Espers show, All Over Everywhere blends Kesner's folk/classical tendencies with Britton's more progressive rock onus. Throw in serious doses of abject melancholy and you get a stark sound that is magisterial and meek all at once. All Over Everywhere recently released their debut album, Inner Firmaments Decay, featuring Kesner and Britton and a collection of contributions from both the classical and rock circles the two songwriters surround themselves with.

Inner Firmaments Decay, as the title may suggest, follows a dark path right from the outset. "The Art Of The Earth" is lush and full of layered sounds. Megan Wheatley's voice is clear and strong, but is buried beneath the wash of instrumental sounds more often than not. While her tone is not that of a trained singer, Wheatley is competent enough to hold her own, but not in the face of heavy handed production that leaves her buried beneath waves of synthetic sound. "Endless Night" opens on a riff that brings to mind Anderson, Bruford, Wakeman & Howe. From this vibrant opening the song seems to lapse into a dirge-like form, only to pick up momentum in the form of wave-like hemiolae that carry the song to its conclusion. "The Shroud" overpowers Wheatley, who nearly disappears in the chorus.

"Honestly" presents a slightly different musical flavor; not so much a shift in style as of production. Wheatley is still forced to fight production decisions, but the arrangement is more sparse, allowing Wheatley a bit more vocal exposure. "After All The Years" becomes a mess; Wheatley and the Theremin are in sync with one another but not with the whole of the arrangement on the chorus. "On A Dark Street" displays a bit brighter aspect to All Over Everywhere even if the song can't escape the band's abiding melancholy. It's a ballad about words unspoken, opportunities missed and dreams misshapen. Things fall apart quickly on "Until The Sun Begins To Fall", a temperamental musical child that ends in a question mark. The closing track, "Gratitude" is billed as the one uplifting track on the disc, and may be but sounds to be strongly in the dirge-like vein that pervades Inner Firmaments Decay until the final three minutes when both Wheatley and the arrangement arise from their doldrums and sound vaguely majestic.

Sadly, it's too little too late for most listeners, who will have checked out long ago. There's nothing inherently wrong with the songs on Inner Firmaments Decay, but the overall mood and problems with production can make it a strenuous listen. There is potential here, but it's not far off to say that the listener never really hears the echoes of what might be on Inner Firmaments Decay. There's no point in being a vocalist if you can't be heard.

Learn more about All Over Everywhere at www.myspace.com/allovereverywherecp.  Inner Firmaments Decay is available from Amazon.com as a CD or Download

.  You can also find it on iTunes.

Labels: All Over Everywhere, Yes