Kerry Patrick Clark - On The Road To Human Being 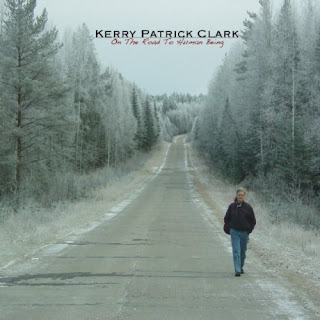 Kerry Patrick Clark is difficult to classify, drawing from a musical well that samples the waters of folk, rock, country and Americana without giving in to a specific stylistic conceit. It is this musical malleability that allows Clark to pursue such subtle and varied arrangements as background to his songs about the ins and outs of the human condition. The winner of multiple songwriting and performance awards recently released his fifth studio album, On The Road To Human Being, displaying a nearly magical touch as a storyteller in song.

Clark opens with "Brighton Boulevard", a reminiscence of youth that treads the waters of growing pains, love and regrets. The song has a Jackson Browne feel, and Clark sounds more than a little like The Waterboys' Mike Scott on vocals at times. "Row" has great energy; a song about making the most out of life that's very catchy. In a more rock-oriented arrangement this may have serious potential as a rock single. As is it's a tremendous bit of songwriting. "On The Road To Human Being" shows off Clark's ability to subtly serve up slices of the human condition in song with maximum effect. "Pass It On" ruminates on the knowledge we pass on from generation to generation in the casual interactions of parent to child. It's a moving testament to the power of love and the spoken word.

Clark will leave your head spinning with the simply beautiful "Lullaby". It's an amazing tune that you'll want to sing to your own children. "Be The Change" takes one of Mahatma Gandhi's most repeated quotes and turns it into a song about changing the world in small steps. Clark's arrangement is superb and the message is both timely and universal. "Time" returns to the concept of making the most of each moment as Clark ponders how quickly time passes. "How Could Anyone" is your basic, old-fashioned gooey love song, but Clark keeps it from sounding cliché with an honest, heartfelt vocal. It's back to the human condition for "Little Red Riding Hood", where Clark turns the classic nursery rhyme into a parable for modern life that reaches far beyond the basinet. Clark takes another shot at a love song with "This Is Love", a mature take on the subject that has enough heart to connect with a lot of people. You could imagine this tune showing up on charts on both the country and pop side of the wall. "You" is an incredibly touching celebration of a splendid life. You'll find yourself wanting to know the person this was written about. Clark says goodnight with one final message about living in the moment in the form of "I Just Danced". It's a modest epilogue that summarizes the message of On The Road To Human Being.

Kerry Patrick Clark is a songwriters' songwriter. Nowhere near as well known as he should be, this is an artist that other songwriters and performers listen to and learn from. Clark has a deft lyrical touch, and crafts pleasing arrangements around melodies that are catchy and memorable. Perhaps the greatest asset in Clark's repertoire is the inherent honesty and affability that he projects. Clark is a guy you'd have a beer with and gladly listen while he wove his stories. On The Road To Human Being plays like just such a conversation.

Learn more about Kerry Patrick Clark at http://www.kerryclark.net/ or www.facebook.com/kerrypatrickclark.  On The Road To Human Being is available as a download from Amazon.com

and iTunes.  CDs are available directly from Clark via the merchandise page on his website.
Posted by Wildy at 5:10 AM