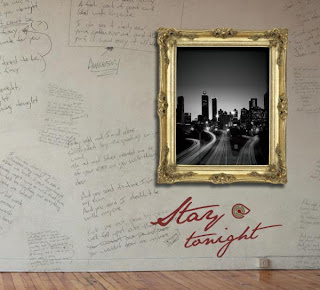 Chasing Jones is a Canadian quartet with a propensity for pop-inflected rock songs that get inside your grille and stay there. Coming together in 2007 as a brother duo, Nick and Adam DiLullo didn't know what they were getting themselves into. Luring hometown boy Blair Brown (drums) to return home from Los Angeles, the twosome became a threesome and went on to record their first EP, The Lie. Soon thereafter Chasing Jones happened upon bassist Dwayne Ulliac and the circle was complete. Earlier this year Chasing Jones released their second EP, Stay Tonight, a collection of five irrevocably catchy rock songs destined for your ears.

Stay Tonight opens with "Anniversary", a snappy, hook-laden pop rocker that's likely to have radio program directors salivating. "Anniversary" has the sort of energy and momentum that sends people to their web browsers to find out just who Chasing Jones are; a perfect lead off to the EP. "Anniversary" also carries with a dark tale of love lost inside that happy, peppy rock arrangement, a nod to bands like The Cure that won't go unnoticed. "Say You Were Right" is a desperate plea for company that gets a bit caught up in repetition but is sonically pleasing. "Amelia" is something of a rock n roll tragedy. The song is written from the perspective of someone who is in love with someone who has all the wrong ideas about love. He yearns for her and lets her know he's there, but she's so stuck in bad patterns she can't even see him. All of this is delivered in poetic terms in a highly compact, hook-laden rock arrangement that could be a pop/rock hit in its own right.

"Twenty-Third Avenue" is a dark, disputed love song about realizing what you want once it's too late. Vocalist Nick DiLullo sings a comfortable melody while invoking the appropriate amount of hopeless hopefulness in a gentle swaying tune that gathers the momentum of inevitability before resolving to where it began. Stay Tonight closes with the turbulently pensive "Piece By Piece", which grows slowly and steadily into the sort of infectious arrangement that seems to be the trademark of Chasing Jones. Once again the catchy melody and big hooks complement lyrics of melancholy and heartbreak, an intriguing juxtaposition of musical setting and ideas that adds spark to Chasing Jones' musical milieu.

Chasing Jones creates a bit of magic on Stay Tonight, crafting five songs with solid rock radio credentials without making it obvious they're trying to do so. The melodies and arrangements on Stay Tonight have the sort of snappy feel that gets inside your skull, and Chasing Jones’ lyrics explore the sullen side of human relationships with an ardor that will peak your interest. Based on current tastes it would not be at all surprising to hear Chasing Jones all over the radio dial this summer and fall, as well as finding some of these songs on the soundtracks of some of your favorite network television shows. With the right break, Chasing Jones could be very, very big.

Learm more about Chasing Jones at http://www.chasingjones.com/ or www.myspace.com/chasingjones.  Stay Tonight is available digitally from Amazon.com

.  If you prefer to own the CD you can get it directly from Chasing Jones.
Posted by Wildy at 5:10 AM

I've met these guys once and they are amazing! You'll have to definitely listen to their album because it is the shit. :)