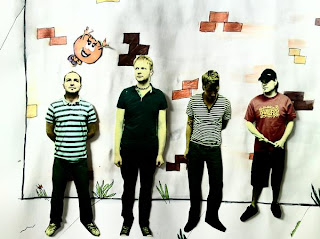 British quartet Merry-Go (Matthew Norris - drums/backing vox; Adam Robertshaw - guitar/backing vox; Jonathan Smith - guitar/keys/backing vox and David Fisher - bass/lead vox) have received comparisons ranging from Big Country to Biffy Clyro, Nada Surf and even U2. While you might think that such an eclectic mix of comparisons would describe an anachronistic sound, Merry-Go sticks to a fuzzy-yet-melodic straight-forward style of rock n roll. Merry-Go must be doing something right, having spent more than three months on the UK unsigned band chart with their single "Invisible Girl". Merry-Go tries to recreate that success with their self-titled EP, released late in 2009.

Merry-Go opens with the lushly driven alt-pop of "Intentions", a reminder that every moment is fleeting and that intentions, when not acted upon become lost opportunities. "Places" is a catchy active rocker with a solid melody line but too much fuzz and too little diction to be understandable. Merry-Go closes with "Whatever Happens", a catchy fuzz-rocker full of fatalism and a catchy hook that will stick with you once the EP is done. The Merry-Go EP is a sharp fuzzy rock, built on solid hooks, singable melodies and a consistent presentation. This isn't a groundbreaking EP by any means, but it's a solid and promising effort from a young band.

Learn more about Merry-Go at http://www.merrygo.bandvista.com/ or www.myspace.com/merrygo05.  No active online purchase points appear tobe available for Merry Go, although tracks can be downloaded from the band's Bandvista site.
Posted by Wildy at 5:00 AM