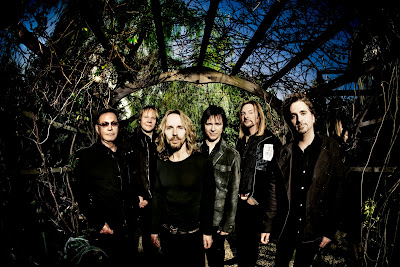 Born of The Windy City, Styx was forged of the last gasps of the 1960s. Influenced by rhythm and blues and rock n roll, Styx has undergone significant transformation, both musically and as a band. Much has been made of the public divorce of Styx and Dennis DeYoung, both in the press and among fans of the band, but both continue separately as vital and successful artists. This fall, Styx will engage in a once-in-a-lifetime tour, recreating two of their classic albums live: The Grand Illusion and Pieces Of Eight. In celebration of this tour, Styx will release Regeneration, Volume I, a seven song EP featuring new recordings of six classic Styx songs as well as one new track.

Regeneration, Volume I opens with a new Styx tune entitled "Difference In The World", a mellow rocker about the changing of perspective from youth to adulthood; the realization with time that we are responsible in some fashion for the world in which we live. It's a great melody, voiced by Tommy Shaw, and it's perhaps the first Styx song with a shot at real radio airplay in some time. While the new song is a solid add to the Styx songbook, Regeneration, Volume I is all about recreating the past. Lawrence Gowan takes lead on "The Grand Illusion", taking over for the departed DeYoung. Gowan gives a dynamic performance that is likely to appeal to all but the most hardened DeYoung supporters. Styx sticks with the original arrangement with slight variations in the synth and in the main guitar solo. "Fooling Yourself (The Angry Young Man)" sticks to the original script as well. The version offered here more closely reflects the energy and sound that Styx achieves in its live shows, although it should be noted that the vocal mix of Styx' trademark harmonies isn't quite the same with the current lineup.

"Lorelei" was a minor hit for Styx the first time around. Voiced by DeYoung originally, James Young takes the mic for the updated version. It's a pleasant surprise, as one might expect that Lawrence Gowan would have been the natural choice, but Young brings to "Lorelei" the raw exuberance that made the original work so well. "Sing For The Day" has long been a hidden classic better known to Styx die-hards but which never got a lot of play either on the radio or live. It's a "carpe diem" song; a musical paean to following your dreams. The subtle changes here won't be noticed by most, but there's a vibrancy to this version that cannot be ignored, and Tommy Shaw sings it with all of the passion he did when the song premiered in 1978. Shaw breaks out the 12-string guitar for what has become his signature song, "Crystal Ball". Once again, changes from the original are subtle, but where the original carried all the angst and uncertainty of a young man breaking onto the world at large, a knowing melancholy swirls in and blends with that angst in the current version. "Crystal Ball" turns out to be the most striking recreation on the album.

Regneration, Volume I closes with what is bound to be the most controversial track, "Come Sail Away". While this is perhaps the song Styx is most known for, it is also the one that is most distinctly Dennis DeYoung's. Simply put, there will be some fans who will never accept this version as a replacement from the original. That being said, Lawrence Gowan does a credible job in DeYoung's place, both vocally and in the atmospherics of his keyboard work. While there will be detractors, this is a solid update of a classic song and fits well with the sound Styx achieves in concert.

Styx is certainly not what they once were. No band can lose 3/5 of its core (including one of the original songwriters and singers) without growing into something new. The good news is that Styx rocks with all of the vitality and working class gusto that made them superstars in the 1970's. If anything, Regeneration, Volume I proves what fools the Rolling Stone ed... oops, I mean the Rock N Roll Hall Of Fame board are for not enshrining Styx long ago. The vocal mix is a bit different, and Lawrence Gowan brings his own distinctive personality to the chair once held down by Dennis DeYoung. Tommy Shaw and James Young are both a bit older but none the worse for wear. Bassist Ricky Phillips (The Babys, Bad English, Coverdale/Page) is a competent sit-in for Chuck Panozzo, who still shows up and performs with the band from time to time. Of Todd Sucherman there's nothing I can say that hasn't been trumpeted by fans and critics all over the map, except to say that John Panozzo would be proud. From the creative angle, Regeneration, Volume I may seem a bit cynical. Styx and/or its current former labels have released at least fifteen albums since 1995. Of those, six have been live recordings; six have been compilations and only three of new material. This from a band who managed four consecutive platinum albums between 1977 and 1980, and a total of eleven albums of new material between 1972 and 1983. While that pace probably contributed in large part to Styx' original breakup in 1984, there must be a happy creative medium in there somewhere. Regeneration, Volume I proves that Styx still matters, but some new material (beyond the occasional token new track to sell a compilation) wouldn't hurt.


Please note that the Amazon.com prices listed above are as of the posting date, and may have changed. Wildy's World is not responsible for price changes instituted by Amazon.com.
Posted by Wildy at 5:10 AM

Styx is incapable of producing a new album with NEW songs or no one will produce a record for them.

One song is all you get on this rehash. The main reason for this rehash is so that they can redo Deyoungs songs and wouldn't have to pay him as much in royals if they used a song in a movie. They would still have to pay him for writing credit though.

Styx said a while back they want to ROCK out and that is one of the reasons Deyoung is no longer in the band because he was to soft in his music (babe, Best of Times are examples). The new song on this so called album isn't hard rock at all. Cyclorama, Styxs other album which had an ok hit on it also had a song that is not Hard Rock called Yes I can. The better songs on that album were written by Glen Burtnik who also is no longer with the group due to issues in the Burtnik family as well as issues in the styx family. Styx can't hold on to there better song writters...Put Dennis, Glen, and Tommy in a room together, and you might come out with a good album.

Gowan is a great piano player and performer and can move a crowd, and criminal mind is a great song, but it is his song. Gowan's voice on Deyoung songs is lack luster to be nice about it. Grab a copy of 21st Century Live and listen to "Rockin the Paradise" it is not a good song by him and proves he needs to stick with songs that he can sing that are in his scope and range.

Lorelei by Jy, hmmmm, Jy isn't bad on it, his old raspy high voice is ok, but he sure isn't Dennis Deyoung.

Speaking of Deyoung, he released an album with new music in Canada (One Hundred Years from now) and then released the same album in the USA and added two different songs and an omitted one song from the canada version. A few reviews said that the album sounded more like Styx than the band performing as Styx now sounds. Although the album didn't sale in the states because of poor management at the record company, the album was still good and had NEW songs on it (no rehash here folks).

Record company, does Styx even have a Record contract???

Rock and Roll hall of fame?? hmmm, not this version of styx, maybe a few members in hell first :), I kid because I care. You might see Dennis, Tommy,Jy, John, Chuck in the hall sometime. You could even see Dennis Deyoung in the hall first because of his accomplishements outside of styx as well as in Styx.

Bottom line is, if you want a song for a multimillion dollar movie, get yourself an origianl song by Styx. If you want a song for your bar mitzvah, this might be right up your ally. If I purchase this, it might get one play,and then it will vanish into the night or become a cup holder like many of my aol disks did :). Sorry to ramble but I feel better now :).

The Sellout Is Complete Tommy Shaw Charlie Brusco Chuck Panazzo and Jim Young have killed the legacy of STYX. Putting out a Regurgitation CD that no record company asked for just to have a new 30 dollar product to sell at there shows tells me it's all about taking the dumb fans money who go to see them. They have Gowan doubled with high octane re-verb just so he could sound half way decent at best. I really believe they picked this trash singer just to shove it up DDY 's butt. So that makes Gowan the butt (no pun) of the joke. What a dumbo to be used by these guys for 10 years. Great job Larry keep following your pal Tommy around just to collect a pay check while you kill the once great band.

Do yourself a favor and listen to it on youtube for free or download a torrent for that matter and save your money, you wish you had. I have this and it sounds like a new band tring to hard to create there first album. Too much double track vocals and other weird audio tricks. It is a shame that styx would insult themselves this way, because Styx use to be a pretty good band with great talent. Two songs have already appeared on youtube and the rest will probably pop up before to much longer. Please, don't spend any money on this and listen to it for free. Your pocket book will thank you. It isn't worth the price.I have Heard these songs before and they are alot better in the original form (even a scratchy record of the original sounds better). The originals were also done in studio the correct way, not done with pro-tools and all the software that is out there today.

The sad truth is that Tommy Shaw wanted Styx to be his band..so, he pushed Dennis DeYoung out and this is what became of a once great group. Don't get me wrong...I think Tommy is a great songwriter and musician...I just don't think his version of Styx is the right one. Bring back Dennis and I will start buying their records and going to their concerts again. Until then...Just download for free, listen once and delete it from your computer.