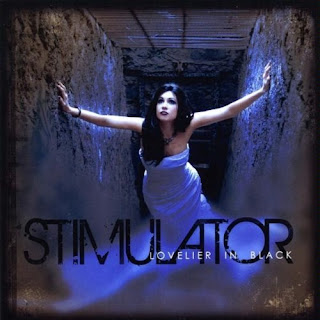 Stimulator has an identify problem. Vocalist Susan Hyatt and guitarist Geoff Tyson play with sounds and styles the way a cat plays with its prey: you never know from which direction they will strike or how hard. What is clear is that Stimulator is capable of rocking hard but can also take on light pop airs that lend themselves too much dancing. This poly-stylistic approach is why Stimulator has done everything from open for The Go-Go's and Duran Duran to stealing the show at the Vans Warped Tour. Stimulator's third album, Lovelier In Black, finds Hyatt with a new hair color and a new attitude, exploring the darker elements of life from a highly personal perspective.

Lovelier In Black starts out strong. "Untouchable" has a big, heavy rock sound that's highly produced. The vocals are buried too deep in the mix, but the heavy rock/electro-dance hybrid sound is novel enough to capture the attention of radio program directors. "You Think You're Sorry Now" is more of a dance tune with big guitar. The vocals are buried deep within the sound mix, obscuring Susan Hyatt's voice, but there's real pop sensibility to the song even if the construction is a bit on the cookie-cutter side of things. "Lovelier In Black" is an enjoyable anti-ballad that's built around modular vocal harmonies. It has a great melody and shows off Hyatt's voice in a positive light.

"Me & My Rhythmbox" is full of innuendo and serves over a heavy dance beat. It has the sort of sound that does well in the dance clubs but isn't terribly musical. It's a sign of what's to come as Stimulator falls into a rut of innuendo and cooked up dance beats with lots of guitar for the next five songs. "Chasing The High" turns the corner a bit and the closing number, Sonny & Cher's "Beat Goes On" is stellar, but most listeners will have tuned out by then.

Stimulator has a gimmick; it's one that will likely work for them to some extent. Vocalist Susan Hyatt is solid, but the songwriting is generally no better than average, and the band substitutes sound for creativity across most of Lovelier In Black. One can't help but wonder if there isn't more beneath the surface of Stimulator. It may be vital to the band's future.

Learn more about Stimulator at http://www.stimulatortheband.com/ or www.myspace.com/stimulator.  Lovelier In Blackis available from Amazon.com as both CD

.  Digital versions are also available from iTunes.
Posted by Wildy at 5:00 AM