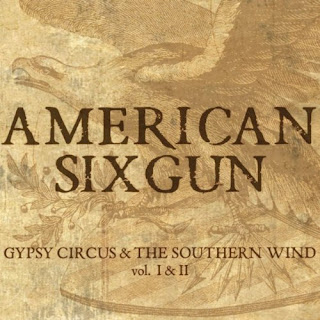 American Sixgun continues their serendipitous rise through the musical ranks with the release of the double EP Gypsy Circus & The Southern Wind, Vol. I & II. Formed in the spring of 2009, American Sixgun signed with Eulogy Recordings (RED/SONY) just six weeks later and released their debut album, Bayside in the fall of 2009. Not ones to rest on their laurels, American Sixgun is back already with twelve new songs, showing off their hard rocking side as well as their bluesy southern rock persona.

American Sixgun opens with "America Is Burning", a classic punk protest song that does the forefathers of punk proud. "America Is Burning" defends America the country for its ideals and takes to task all those who would run her down for their own ends; referencing the BP Oil spill and corporate/political raiders in general terms while bemoaning the loss of liberty we face. "When The Spirit Moves" expresses discomfort with the classical concepts of heaven and hell as put forth in Christian theology in angry and vibrant terms. There's a real classic 80's metal feel to the tune that's enjoyable. "Dirty Sweet" is all it implies, a hard rock song of lust that's entertaining but not likely to be played during a NOW convention.

"Somebody Like You" shows a softer side to American Sixgun, an alt-rock power ballad built around solid vocal harmonies and a near-wall of sound arrangement. "Prophet For Profit" takes to task dollar-based evangelicals who sometimes appear to be more business than faith in a catchy rock arrangement that's a great listen. "You Kill The Things You Love" is the true highlight of the double EP, sounding like a classic rock gem that's been updated for today. American Sixgun gets the perfect blend here. American Sixgun closes with "Say A Prayer", an anthem from the perspective of one who is trying to put his life back together after running away for too long. The song is well written and reflects a mature perspective that bodes well for the band.

American Sixgun has the energy and vitality to last a longtime in the rock game, and shows songwriting elements on Gypsy Circus & The Southern Wind, Vol. I & II that suggest they will be more than just a flavor of the moment. While well-molded with a sound that fits nicely into an active rock programming niche, American Sixgun doesn't conceal a heavier side that earns credibility from fans of rock n roll as well. Gypsy Circus & The Southern Wind, Vol. I & II may well be a breakout album from American Sixgun.

Learn more about American Sixgun at http://www.americansixgun.com/ or www.myspace.com/americansixgun.  Gypsy Circus & The Southern Wind, Vol. I & Vol. II is available from Amazon.com

or iTunes as a digital download.
Posted by Wildy at 5:00 AM