Isabel Rose - Swingin' From The Hip 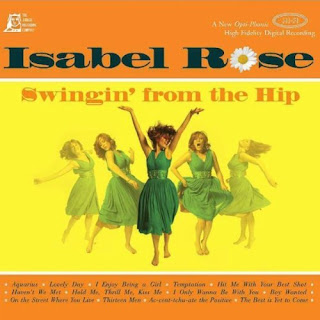 Isabel Rose - Swingin' From The Hip
2010, The Jubilee Recording Company

Isabel Rose is a lady who makes things happen, both onstage and off. Screenwriter, novelist, movie star, off-Broadway star... none of these callings has proven too much for Isabel Rose. It should be no surprise that her debut album, Swingin' From The Hip looks poised to prove another facet of this versatile and prolific performer. Born on Manhattan's Upper East Side, Isabel Rose has steeped in New York's culture almost from her birth, and her love of both jazz, Broadway and pop music shines through on Swingin' From The Hip.

Rose opens with the bossa nova swing of "Aquarius", adapted from the rock musical hair. Rose has a fine voice, a bit reserved but full of warm tone and a bit of Vegas swagger here (that sophisticated Rat Pack swing). Rose swings up Irving Berlin's "Lovely Day" (Call Me Madam) in fine fashion, keeping the Broadway feel of the original while updating it for hep cats everywhere. Rose goes big band for Rodgers & Hammerstein's "I Enjoy Being A Girl" (Flower Drum Song). The arrangement fits Isabel Rose nicely. "Temptation" is well done, and leads into the slinky nightclub arrangement of Pat Benetar's "Hit Me With Your Best Shot", injecting burlesque undertones into a generally torch-styled interpretation.

One of the highlights of the album is Rose's version of "Haven't We Met", where her voice takes on a slightly darker aspect that's nothing short of breath-taking. The clarity of vocal tone and warmth of Isabel Rose's voice is a real treat. Rose plays it straight on the Harry Noble-penned "Hold Me, Thrill Me, Kiss Me", which originally spent 18 weeks on the Billboard pop charts for singer Karen Noble in 1952. Rose seems to have a special connection with this one, and makes it her own without substantially changing the song. Rose gives listeners a lighter moment with her cover of "I Only Wanna Be With You", the first single Dusty Springfield ever released. Perhaps Rose's only misstep on the entire album comes on the George Ira Gershwin tune "Boy Wanted". Perhaps it's just the chemistry of the song, but Rose never really sounds like she connects with this one (and its tough trying to stand in the shoes of Ella Fitzgerald, even for a performer of Isabel Rose's talent).

Rose rebounds nicely on Lerner & Lowe's "On The Street Where You Live" (My Fair Lady), an amazing swing version of the Broadway classic. Rose is inspired here, as will you be. Johnny Mercer's "Ac-cent-tchu-ate The Positive" gets the royal treatment from Rose. Vocally the song is well performed, although the tempo, and therefore Rose, do sound a bit rushed at times. Rose closes with Cy Coleman's "The Best Is Yet To Come" in a stripped down arrangement that shows off Rose's voice and also features some tremendous guitar work.

Isabel Rose is now officially a quintuple threat. Swingin' From The Hip should establish Rose as a vocal force to be reckoned with, and you can't help but have respect for the highly professional and accomplished band she has behind her on the album. Rose recalls the days when great performers would tackle almost any style and make it their own. It's not just a matter of having a voice or a band; there's a cult of personality that surrounds great performers. Sinatra. Babs. Bette. Torme. Bennett. Newton. It wouldn't be entirely surprising if twenty years down the road people were adding Rose to that list.

Learn more about Isabel Rose at http://www.isabelrose.com/. Swingin' From The Hip drops in the digital world on September 14, 2010, with a CD release planned for October 19, 2010.  You can pre-order the digital release from Amazon.com