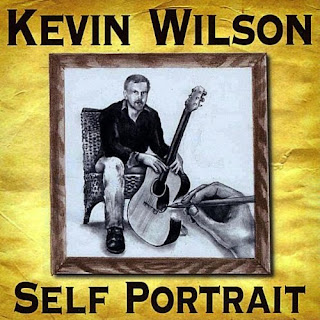 Kevin Wilson has been an integral part of the Florida heavy metal scene for more than a decade, writing and playing guitar for Liar, Astaroth and Lucian Blaque, which was nominated by both the Tampa Bay Music Awards and Tampa Bay Metal Awards as Metal Band of the year two and three times, respectively. Wilson himself was nominated once for Metal Guitarist of the year. As most things do, Lucian Blaque ran its course, and Wilson found himself in a period of re-assessing his goals. The result of that contemplation is Wilson' debut solo album, Self Portrait. Comprised of fifteen original songs, Self Portrait features Wilson's softer, singer-songwriter side on nine tracks, but also shows his hard edge on the six tracks on the second disc.

Self Portrait opens with "On The Lake", a solid slice of melodic rock with great lead and harmony vocals. "On The Lake" has great energy but doesn't bowl this listener over with it. It's a song of reverence for time and place, with hope, peace and comfort wrapped in one focal point. "Winter In Paradise" shows off some guitar muscle in the middle of a fairly gentle rocker. Wilson has great feel on the guitar, culling musical streams out of the arrangement as if peeling back layers to show you what is beneath. "Scars" is a mellow acoustic rocker that sounds a bit like a power ballad but never explodes into full sound like many power ballads do. The vocal harmonies here are tremendous; Wilson takes his cue from some of the big triad harmonies popular among arena-rock bands like Styx, Journey, Asia and Kansas in a song about salvation and moving on.

"Self Portrait" is actually rather bland for a title track, lacking any real energy and suffering from a vocal line that has a whiney quality to it. Wilson's guitar work is a highlight here, however. "What If" explores existential angst about the future in contemplative fashion, using a mellow arrangement that hides country music threads in the musical seams. Wilson seeks rebirth and renewal on "September Comes"; a song about moving beyond the restrictions and fears we trap ourselves in. "September Comes" features a light airy melody that is almost an ironic foil to the heavy emotional makeup of the song. This irony is enhanced as Wilson seeks rebirth in a season known for the beginning of decay. "Pictures" is lush but not dramatically so, again going for the big vocal harmonies but this time in an Asia-meets-Alan Parsons vibe that's surprisingly good.

Disc two features material that will feel more at home of Wilson's fans from his heavy rock and metal days. Wilson starts out with blues based rock n roll on "Whiskey", an entertaining monologue decrying the spirit's effect on him. It's a solid tune that's likely to be a favorite live. "16 Days" sticks with the blues/rock sound; a somewhat darker with real movement and energy that's an enjoyable listen. "Hellhole" finds Wilson digging into a heavier sound. Lyrically and melodically the song is fairly average, but Wilson's guitar work is very much worth checking out. "Who I Am" and "Angry Now" continue the barrage with darker tones and heavier guitar work, culminating in "A Tale Of Woe". "A Tale Of Woe" wants to be a heavy metal anthem, and has all the needed elements. Wilson has stripped the song down a bit, perhaps to avoid overwhelming the folks who enjoyed with more mainstream rock on disc one. The true metal heads out there will appreciate "A Tale Of Woe", but you'll be wishing for a louder and heavier take; the sort that will likely happen naturally live.

You might expect going in that Kevin Wilson's heavier material would be more prolific than the lighter fare, but Self Portrait defies expectations. Wilson shows himself to have a keen ear for melody and harmony while stripping away the metal accoutrements he generally creates with. Wilson calls on the influences of his youth, blending a mellow mien with the sounds of 1980's rock scions and a bit of guitar muscle to create a sound that's not exactly new, but novel enough and well-crafted enough to catch your ear. The heavier material on Self Portrait is surprisingly mundane; Wilson seems to abandon his more melodic tendencies here but also strips the sound down, robbing the songs of their more vociferous and angry natures. Self Portrait is likely to gain Wilson a number of new fans, but may alienate some of his established fans in the process.

Learn more about Kevin Wilson at www.myspace.com/kevinwilsongs.  Self-Portrait is available from Amazon.com on CD or digitally.  The digital album is broken up into two parts, allowing you to purchase the full release or simply Disc One

or Disc Two, as you wish.