Garrison Doles - Whenever I'm With You 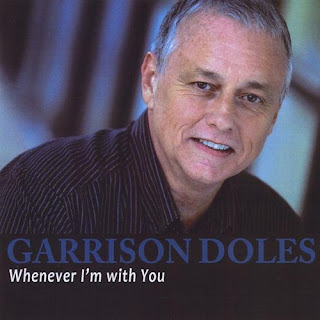 Somewhere on the path to becoming a world-class drinker, Garrison Doles developed a songwriting problem. Starting out with inspirations such as Joni Mitchell, Steve Goodman, Jimmy Buffet and Gamble Rogers, Doles found himself playing dark, smoky bars instead of the inspired folk clubs that first fed his passion. Doles did what any self-respecting person would do; he gave up music, went straight and got a normal life (marriage, job, kids). It didn’t take. Before long Doles was writing songs again and yearning to perform. While old demons don’t speak so loudly anymore, Doles is still captive to his muse, spinning complex and intriguing story songs with a voice that’s hard to walk away from. Doles’ latest album, Whenever I’m With You is a testament to the rode he’s walked and the happy place he finds himself in today.

Whenever I'm With You opens with "Waiting For An Angel", with Doles offers up a gentle folk/blues mixture that's subtle but with a strong melody line. The instrumentation is wonderfully crafted. "My Only Ever One" is a solid love song, mildly soulful and very much in the singer/songwriter tradition. Doles flashes his sense of humor in "Whenever I'm With You", a sweet, upbeat love song that doesn't take itself too seriously.

On "We Give Ourselves Away", Doles begins to play with the concept of laying down yourself for something greater. It's a thoughtful and honest exposition on the concepts of service and sacrifice and the guitar work is amazing. Doles periodically plays with concepts that border on the hinterlands of religion and faith on Whenever I'm With You. "Redemption" is a fine example, gilding the idea of renewal in vague terms but seeming to center on a Judeo-Christian notion of the term. "This Florida Again" looks to the future as the world is in a state of declining, bemoaning the loss of a familiar place as it slowly slips away. "The Osprey Circles" reflects a sense of wonder at the world as it has always been, an interesting turnaround. Whenever I'm With You closes with "By Your Hand", a repetitive prayer of thanksgiving that is pretty in its presentation and almost haunting in its tone.

Garrison Doles is a fine songwriter with both the voice and the guitar skills to be taken seriously on all levels. His writing style is very low-key, and you won't get the most out of Doles' songs unless you really listen. Whenever I'm With You displays a singer/songwriter at the top of his game. If you're the type to really get into lyrics and think about the music you listen to, and can also appreciate a guitar player who knows his instrument inside and out, then Whenever I'm With You needs to be on your list of albums to acquire.

Learn more about Garrison Doles at http://www.garrisondoles.com/ or www.myspace.com/garrisondoles.  Whenever I'm With You is available from Amazon.com both on CD

.  The album is also available digitally via iTunes.
Posted by Wildy at 5:10 AM