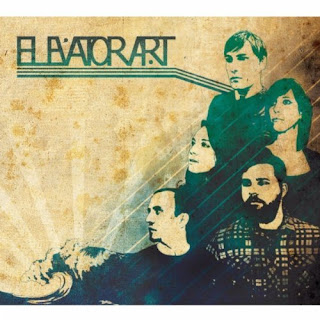 There's nothing like having four lead vocalists and four songwriters to spice up the creative process for a band. Toms River, New Jersey's Elevator Art revels in their multi-voiced persona, veering across a multi-faced musical topography to whatever styles or sounds pique their interest. Daimon Santa Maria (vox/keys/guitar/bass); Mike Jonin (guitar/bass/vox); Jennifer Mustachio (guitar/vox/bass/percussion) and Maureen McGowan (guitar/vox/percussion) surf the waves of percussionist Joe La Scola across the thirteen songs on Elevator Art's self-titled debut album.

Elevator Art opens with Matryoshka, an energetic rocker featuring solid vocal harmonies and a garage element to the sound that makes for great listening. Elevator Art makes their case as inventive arrangers on "Matryoshka", veering all over the map sonically while somehow maintaining a sense of coherency in the song. "Peter Rabbit" examines a troubled family with explosive potential and the neighborhood inertia that allows paths to decay. It's an interesting sociological study in song worth listening to. "Raised By Wolves" addresses the damage dysfunctional parents/families can inflict on children. Cloaked in an alternately folky and muscular rock arrangement, "Raised By Wolves" highlights the anger and adjustments that grow within the children in such arrangements. "Punch & Judy" has limited lyrics, but plays well as a threatening to come off the rails rock instrumental for most of the song. It's a great listen.

"Autumn Epitaph" is a plea for consistency with a country/punk feel that's charming. Daimon Santa Maria is solid on lead vocals and Jennifer Mustachio supports with supple harmony. "Gingerbread Veterans" and "How Does The Day Find You" march on the edge of muttering madness in serene but poignant post-pop arrangements on the way to "Holland Flowers", which may be the most distinctly pop tune on the album. There's a Beatles-esque melodic sense to the song, a vaguely twisted number that alternates love and disaffection in a number so catchy you'll be bouncing your knee before Elevator Art gets through the first four bars. "Deja Voodoo" is a whimsical, stream-of-conscious exercise that's a fun listen and exploits some of the more obtuse angles of Elevator Art's collective wit. "Blah Blah Blah" decries empty talk in an energetic jam tune that could probably expand forever live as per Elevator Art's whim. The band closes with an untitled track that strips down the sound and allows the vocals of Santa Maria and Mustachio to stand front and center. It's a nice way to sign off.

Elevator Art is a bit out there. You may not follow all of their lyrical expositions, but the band can play and has a knack for nifty, occasional counter-intuitive arrangements that run the gamut from rock to jam to pop with folk thrown into the mix. It's a great sound that packs the right mix of mellow and edge. Elevator Art is definitely worth getting to know.

Learn more about Elevator Art at www.myspace.com/elevatorart.  Elevator Art is available from Amazon.com as a CD

.  Elevator Art is also available from iTunes.
Posted by Wildy at 5:10 AM