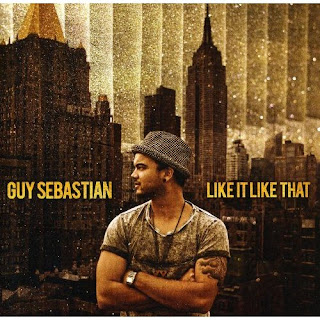 Guy Sebastian is a soul singer from Australia with a sound that's so retro it's fresh. The judge on Australia's version of The X-Factor is also a surprisingly good vocalist and songwriter, blending 1960's Pop and R&B with more modern sounds in a fashion that could catch chart fire very quickly. Sebastian's US debut, Like It Like That was released in June of this year, featuring performances from John Mayer and Jordin Sparks. Produced by David Ryan Harris (Mariah Carey, Nick Jonas, John Mayer), Like It Like That seems likely to open a lot of doors in the US for Sebastian.

Sebastian opens with "Like It Like That", an incredibly catchy pop tune with a pure 1960s feel. You'll find yourself dancing, laughing and singing along to this romantic summer/party song; you won't be able to get it out of your head. Sebastian sounds a lot like Tom Jones on "All To Myself", a big R&B/pop number that shows off Sebastian's expressive voice in fine fashion. "Art Of Love" is a duet with Jordin Sparks, and a big missed opportunity. The production here is very modern and slick, complete with vocal effects and too much clutter. Both Sebastian and Sparks have tremendous voices and would have been better left to simply spin the song over a minimal arrangement, but David Ryan Harris appears to have been aiming for the Top-40 charts here and in the process ruined what should have been a benchmark duet.

Sebastian gets back to pure pop with "Attention" before sidling into "Magic", a duet with Australian singer Tarryn Stokes. This time they get it right, with both Sparks and Sebastian at the top of their respective games. "Bring Yourself" is a classic 1960's-style soul ballad and offers what may the most dynamic vocal performance of the album. "Never Hold You Down" keeps that classic feel, updating it just enough to make it fresh without losing the essential retro flavor of the tune. Sebastian channels Marvin Gaye on "Fail To Mention" and keeps in the same vein with "Never Be You". Gaye fans may do a double take the first time they hear "Fail To Mention". "Coming Home" is a pure pop/classic R&B confection you can't help but love. Sebastian pulls a major change of pace for the final song, "Perfection", detailing the creation of a woman in heaven. This tune puts the better half of humanity on a collective pedestal and is likely to make a lot of young hearts swoon when Sebastian sings it in concert. At the same time it's quite saccharine and could inspire an equally strong polar reaction from those not inclined to the tune.

Guy Sebastian is at his best when he keeps it simple. This is an artist very much steeped in the traditions of classic R&B and soul music. Sebastian explores these sounds with a distinctive pop sensibility that gets under your skin on Like It Like That. When Sebastian tries to be too modern or too sweet it comes across as less than truthful, but when he stays true to his sound he's personality plus. Like It Like That has its off moments, but balance it's so good you won't be able to put it down. Look out American, here comes Guy Sebastian.

Learn more about Guy Sebastian at http://www.guysebastian.com.au/ or www.myspace.com/guysebastian.  Like It Like That is available through amazing as a pricey import on CD

.  The album is also available digitally via iTunes.
Posted by Wildy at 6:09 AM

Enjoyed your review. The female on 'Magic' is actually Tarryn Stokes, an Australian singer.

Oh,and I forgot, just for your information, 'Perfection' was written especially for Guy's wife, Jules, and was first performed by him at their wedding.

Interesting he evoked Marvin for you. Most think of Sam Cooke.

Thanks for picking that up! I have made the correction...

Loved your take on this amazing album , my favourite is Attention but love all the songs .

I like your review of Guys album,but one of my favourite songs is Art of Love, and i don't think sounds cluttered.But i do love all the songs on the album I think Guy has an amazing voice,and he one of those artists who i would love to see live.

Also, Wildy ... the album is available from Barnes & Noble at the usual US prices. Could you change that too, please? Have you heard The Memphis Album? Some of his best ever vocals on that cover album, and he's also got a lot of the musicians that played on the original tracks.

I think Tarryn Stokes would be stoked to hear you thought she sounded like Jordin haha. Thanks for the great review. I personally love the saccharine stuff - Perfection is one of my all time favorites from Guy, and it makes me tear up every time (especially because I picture him singing it to Jules on their wedding day). Hope you get to hear Guy perform live at some point - there's nothing like it.