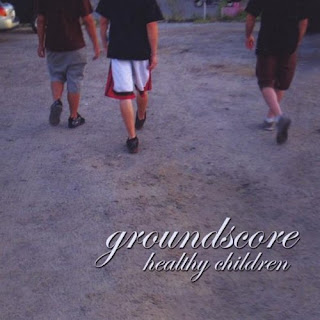 Washington, DC-based reggae rockers GroundScore formed in 2008 and have been making waves locally ever since. With a sound that runs the gamut from Sublime and Sugar Ray to Black Flag and The Dead Kennedys, GroundScore has the potential to cut a large demographic swath with their music. This mix of sounds is on full display on GroundScore’s debut album, Healthy Children.

"Ball Sweat & Tears" stirs memories of bands such as Black Flag and The Dead Kennedys in a fifty-two second headlong rush of sound. "Later On" is catchy and features some ethereal guitar work that dances over the driving bass rhythm of the song. "You'll Always Be A Loser" starts out in a melodic hardcore binge that resolves into a pop/reggae vibe that turns deafeningly repetitive in the chorus. "Hey Kidz/Real Love" starts out like a Green Day punk/rock anthem and devolves into a bland pop/rocker with a vague reggae beat. "See You All Tomorrow" keeps with the reggae rock feel on the verse but soars into a driven rocker on the chorus. It's one of the better all-around compositions on the album. GroundScore zooms away at top speed, saying goodbye with "You Don't Know Me Anything", slowing done for the verses to reminisce on time past, opportunities lost and simple pleasures. The song starts promisingly but loses focus in the verse.

GroundScore seems to be a band that thinks (musically) best at high speed. When thrashing their way through a chorus or occasionally an entire song the band is tight as can be and on the ball. It's the slower, reggae-based rock songs where they seem to run out of focus and fail to find focus or fall prey to repetition. There's obviously a contingent of the band in love with the Reggae-rock styles of bands like Sublime and Sugar Ray, but there's also a hard-core interest here. Both styles exist on Healthy Children, but they're not integrated. GroundScore tries to make both a part of the picture by crafting songs with reggae-rock verses and hardcore choruses, but this often ends up sounding contrived. If GroundScore can ever marry the two styles successfully they'll be considered visionaries. For the time being they are a band with two distinct minds; a house divided.

Learn more about GroundScore at www.myspace.com/dcgroundscore.  Healthy Children is available from Amazon.com as both a CD

.  Digital versions are also availbale from iTunes.
Posted by Wildy at 5:00 AM