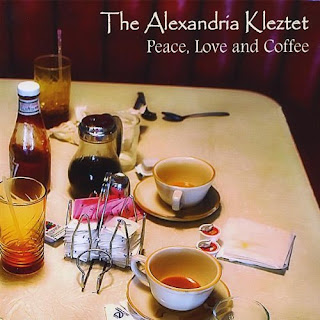 Playing clarinet doesn't disqualify you and a front man. Just ask Seth Kibel, the lead in front of the Baltimore/Washington area phenomenon known as The Alexandria Kleztet. With thirteen Washington Area Music Association Awards (Wammies) under their belt, The Alexandria Kleztet has started to build credibility as an international act. Annual performances at The Kennedy Center and the Peabody Institute and the Seminas Musicales festival in Chile have opened up the wider world to The Alexandria Kleztet's intriguing mix of Klezmer, Eastern European folk, jazz, classical and rock n roll. On The Alexandria Kleztet's fourth album, Peace, Love And Coffee, the quartet offer up six original compositions and eight dynamic interpretations of classic and popular tunes.

Opening with a vibrant take on "Bei Mir Bist Du Schein", The Alexandria Kleztet takes listeners undaunted into the world of big band klezmer. Kibel is a wild man on clarinet, pulling riffs out of the air in rapid fire fashion yet blending in with the rest of the group in a performance that is breathtaking. "Shtick Shift" is middles ages modern; a funk groove beneath deep-seated middle eastern roots. "Mu Ha'ish" is a slow, melancholy number; a beautiful melody tinged with a deep sadness that is more passive than active, and somehow powerfully tragic.

Hold on to your hats for "Cantina Band", the John Williams composition from the original Star Wars movie A New Hope. The Alexandria Kleztet is so alive in this number you'll wonder if they secretly wrote it. "Bad Coffee (Builds Character)" is a big change of pace with a move into dark klezmer/rock. Scott Harlan handles the bass like a master, with fretwork that would make Bakithi Kumalo envious. The Alexandria Kleztet take off on an adventurous and daring jam in the form of "No One's Listening", taking risks as an ensemble to simply create without a clear delineation of style. In it are the sorts of sparks that can send a jam session on for hours. The rest of the album is high quality, but none of the five remaining songs can quite capture the energy or vitality of the first 2/3 of the album. "Harmelodica Theory" is divergent and exploratory and likely more of interest to other musicians than casual music fans, and "Frailach #37" works in a snippet of Bob Marley's "One World", but The Alexandria Kleztet seem to coast their way home, closing with the ballroom-styled "Youkali".

The Alexandria Kleztet is a collection of four dynamic musicians, but they play intricately and vibrantly together, as if one organism that's interconnected in heart and mind. Seth Kibel leads the way, but Helen Hausmann is his perfect foil on violin. The two instrumentalists tease melodies, each other and the other band members, finding explosive pockets of energy buried deep within each song. Bassist Scott Harlan earns his paycheck several times over with a running musical conversation that fuels the party, and percussionist Tim Jarvis is the rock who keeps it all on track. Peace, Love And Coffee is a dynamic exploration of musical cultures through the melting pot experience, where all the respective inputs become on new and exotic sound that's all of its component parts and yet something new. Even when The Alexandria Quartet misses their mark the results are worth listening to.

Learn more about The Alexandria Kleztet at http://www.kleztet.com/ or www.myspace.com/thealexandriakleztet. Peace, Love And Coffee is available from Amazon.com both on CD

Thanks for the great review, Wildy! We really appreciate your support of independent music!

I have the pleasure of giging with Seth. he IS Mr. Klezmer!!