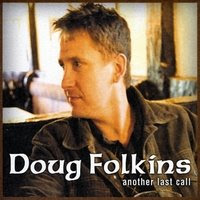 British Columbia, Canada's Doug Folkins opens his fifth album, Another Last Call with Calico Girl, sounding like a cross between Blue Rodeo and early Crash Test Dummies. Folkins has a strong and clear voice that works very well with the material presented here. The arrangements are pleasant; perhaps a little loose in presentation but not uncharacteristically so. Pour Me Another is an acoustic Celtic Rock tune that features some hot fiddle playing. Promise Me sounds a bit more like commercial country music, but without the high gloss sheen that tends to rob popular country music of its flavor. The harmonies here are notable, and Folkins' band has pulled together as taut as a wire.

Streets Of Rome is a Celtic flavored song about Italy; one of the more anachronistic tunes I've heard this year, but extremely well written. The sound here actually reminds me a bit of The McKrells in their heyday. Park The Car is a humorous take on the Irish Drinking Song that might not sit well with members of MADD but fits very well into the musical tradition. One of my favorite tunes here is King Henry's Good Times. The pace here is frenetic, and Folkins' voice rises to the occasion perfectly. See You Smile is an upbeat, wistful love song that will strike home to those who have "been there", and would work just as well in a more rock-oriented arrangement as it does here. Folkins closes out with three classic Celtic tunes, two from the Maritime songbook, Paddy Murphy, Mari Mac and Black Velvet Band. If you've not heard these songs before, pay particular attention to Mari Mac, which turns into a devilish tongue twister that likely doubles as a drinking game in some places. This isn't my favorite arrangement of the song, but I've heard many people mangle this song and Folkins presents the song better than most (although he doesn't push the speedometer the way bands like Great Big Sea have). Black Velvet Band is a bit more traditional and very well presented here.

Doug Folkins reminds me more and more of Kevin McKrell as I listen to him. There is a definite tendency to mix other musical styles with Celtic sounds on Another Last Call, and for the most part the results are positive. The play, singing and writing/arrangement on Another Last Call are all very much above average. I hesitate to call it a great album, as there just wasn't a "whoa" moment here, but it's very, very, very good.
Rating: 4 Stars (Out of 5)

You can learn more about Doug Folkins at http://www.dougfolkins.com/. You can purchase a copy of Another Last Call at www.cdbaby.com/cd/dougfolkins.
Posted by Wildy at 5:20 AM

Thanks for the review Wildy!

Dave, I am glad you like my song "Park The Car"! This is very much a story leveraged from growing up in the Maritime's in Canada. Cheers.