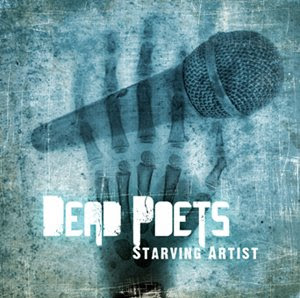 Mark-uz MidKnyte (Knyte) and Lazaros (Laz) combine their lyrical powers to form the duo Dead Poets. Bronx born and raised, their early influences include homegrown artists such as Brand Nubian and Main Source. Dead Poets is a blend of Knyte’s laid back, intellectual lyrical style and Laz’ more flashy, fiery persona. The mix is musical gold, as can be seen and heard on Dead Poets’ debut album, Starving Artist.

Starving Artist opens with Resurrection, a song about survival and renewal for both the artists and the genre of Hip-Hop. Starving Artist is about struggling to improve your place in life; stressing respect and hard work as a means to get where you want to be, whether in music or in life. Dead Poets spend a lot of time talking about the difficulties that exist in black culture and the inner city, but make the point that every person has a choice to stay where they are or work to improve their lot in life, even while berating the system that created the conditions that exist today. Tickled Pink is a fun love song featuring J-Rock that has serious potential for pop and urban radio as well as in the club scene. Denae and L'Monte pitch in on Irresistible, another potential smash on the club scene. J-Rock makes another appearance along with Tsi Labrev on Elbow Room, relying on a classic funk/soul sample and some of the slickest rhymes on the album.

The highlight of the album is Uncomplicated, featuring the soulfully gorgeous vocals of Sadie. The key here, as in most of the album is the struggle to do the right thing. Knight is talking to and about his young daughter here, re-committing to do the right things for and by her and paralleling this with the struggle that all people who try to live good lives face. There is always an opportunity to get ahead in life by cutting corners, but Knight tries to teach his daughter to succeed by being upright ("always follow your heart in a moment of truth"). Stoner's Paradise is either a love song of sorts, but it’s a question of whether it’s meant to be ironic or forthright. My first impression is that it’s an ironic poke folks who immerse themselves in the drug culture to avoid the realities and responsibilities of life, but after several listens I'm not 100% certain.

Tropicana is a pleasant change of pace, sampling a bit of Latin-flavored jazz for a feeling of lounge-cool juxtaposed against some of the hottest rhymes on the record. Dying is the most unusual song on the album. Based in classical piano, orchestration and some ethereal harmony vocals, Dying is a metaphor for the loss one oneself. The song is unusually poignant and haunting for the genre, and will stay with listeners long after the album has stopped playing.
Dead Poets take some of the better elements of Urban & Hip-Hop styles and wrap them around intelligent and well-wrought rhymes to craft a remarkable debut in Starving Artist. The album is atypical enough of the genre that it may have a little bit of difficulty gaining traction in the usual outlets, but has the potential to be accessible to folks who don't normally listen to Hip-Hop. Dead Poets struggle with the world as it is and continue to try to make the right choices; entreating others along the way to do the same. The pride present on Starving Artist is the dignity of human spirit to overcome, regardless of the obstacles that stand in the way. Redemption is a goal of every day; a mix of survival and conscience that Dead Poets expect from themselves, their children, and the world around them.

You can learn more about Dead Poets at www.myspace.com/deatpoetsmusic. You can download Starving Artist from iTunes, Amazon.com, Rhapsody or eMusic.
Posted by Wildy at 5:20 AM