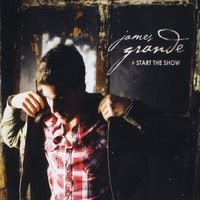 Narragansett, Rhode Island’s James Grande has a lot to say. Mixing the hooky musical panache of Weezer and the smooth vocal approach of Dave Matthews, Grande has been generating some buzz in New England. His self-produced, self-released debut album, Start The Show is sure to garner Grande some attention in a widening arc.

Grande's The American Rockstar is a tongue-cheek glamorization of the life of a popular music flavor of the month. To Honor plays like a tribute to the people who fight wars while a left-hand jab at the reasons for those same wars. Its a bit obscure in point of view but well written for all of that. Together And Alone is a modern love song for the disaffected, dealing with some of the classical themes of love from a professorial perspective. Over And Over is bound to be included on mix-tape and dedication lists as a sweet love song that goes a little bit deeper than your usual sugary ballad. Burn This Bridge is the most memorable song on the disc; an invitation to recovery from sorrow or a precipice before the fall, depending on how you hear it. Hello, Goodbye closes out the album on a poignant note and in a minimalist arrangement that leaves a strong impression.

Start The Show is a strong effort from James Grande. Aside from the last song there aren't any real wow moments on the disc, but every song is consistently well-written and performed. Grande comes across as a little young in the lyrical aspect, but this will grow as he does and isn't really a big deficit. The songs are well crafted and accessible without really grabbing hold of the listener. Start The Show is a pleasant listen.
Rating: 3 Stars (Out of 5)

You can learn more about James Grande at www.myspace.com/jamesgrande. You can purchase a copy of Start The Show at www.cdbaby.com/cd/grandejames.
Posted by Wildy at 5:10 AM