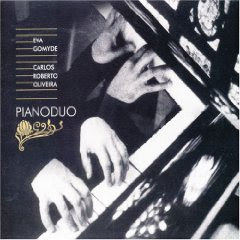 Eva Gomyde & Carlos Roberto De Oliveira form Piano Duo, an amazing two-piano team from Brazil. Each a graduate of Magda Tagliaferro School in Brazil, Gomyde and de Oliveira have led lives full of musical performance and continued learning. Carlos Roberto de Oliveira began learning piano from his uncles, including composer/conductor Dom Salvador. He has also studied with Brazilian composer Osvaldo Lacerda and German conductor Hans-Joachin Koellreuter. Eva Gomyde began playing at the age of three and has worked with Ciro Perreira, Nelson Ayres, Koellreuter and none other than Magda Tagliaferro herself. In 2006, Gomyde and de Oliveira released their first recording, Piano Duo. It culls together 4 original compositions, 3 by Dom Salvador and interpretations of compositions by Antonio Carlos Jobim, Egberto Gismonti, Ernesto Nazareth and Yves Rudner Schmidt.

Piano Duo opens with Baiao Pentatonico, creating an almost spring-like feel mixed with the hustle and bustle of a city, all in musical form. Samba De Uma Nota So is 5 1/2 minutes of musical metamorphosis from an almost neo-classical musical palette into progressive and then more classical jazz forms. Meu Caro Irmao is a classic romantic piano ballad that sounds like it should be part of the soundtrack of some old black and white Hollywood film. My personal favorite on the album is Preludio with its cascading runs and grand resolutions. Other highlights include Maria, Lua, Baderna Modal and Arruaca.

Eva Gomyde & Carlos Robert de Oliveira run the table from classical to jazz with the occasional sprinkling of new age ambience on Piano Duo. Like all great instrumental albums, Piano Duo refuses to be relegated to the background. Even the quieter are traps that lull you into momentary complacence before challenging you with something new. Piano Duo is a great listen, and highly recommended!

You can learn more about Eva Gomyde and Carlos Roberto de Oliveira at http://www.pianoduo.com.br/. You can purchase a copy of Piano Duo at Amazon.com.
Posted by Wildy at 5:05 AM