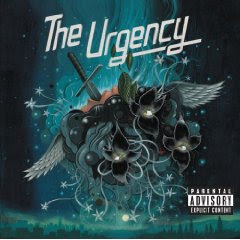 Coming out of South Burlington, Vermont, The Urgency isn’t exactly what you might expect. No Phish-style jams can be heard. There are no alternative jazz leanings in their sound. What you do get is a highly rhythmic, post-punk style with an energy level that matches their name. Add to that the musical theater influences vocals of Tyler Gurwicz and you have a sound that is wholly distinctive. Their debut album, The Urgency, will be released on April 21, 2009 on Mercury Records. The path from South Burlington to Brooklyn to the world stage seems an unlikely one, but in listening to The Urgency you get the feeling these guys were always headed for something big.

Subtlety is not a trap The Urgency falls into, as displayed on the opening trap, Fingertips, which sounds a bit like a meaty Police record. Lead vocalist Gurwicz sounds like a cross between a young Sting and a young Colin Hay, and the rest of The Urgency provides him with a wonderfully rhythmic and melodic backdrop against which to sing. Crimes is infectious and would like do quite well as a single. There's a theatrical element to this song that hearkens back to the arena rock days of concept albums and bands like Styx and Queen. Rooftops mixes a strong melodic mix with a great driving rhythm and Gurwicz’ soaring vocals. The Urgency just keeps getting better and better as you listen.

Hot Damn takes a half step back and then blows the roof off the whole thing with a bridge that explodes into a dark and rhythmic chorus. Slowing down a bit, The Urgency visits us with Memories, a classic-sounding heavy Rock ballad with a sing-song chorus that's worthy of a top-ten single. If you doubt the Police influence then listen to Stop, complete with the classic Reggae undertones from early Police records and a vocal line that Sting could sleep walk through. All We Are is The Urgency gone to The Edge, complete with screaming co-vocals. The song is well done but is very out character with the rest of the album, sounding a bit too formulaic. Move You is another step apart from the sound of the first seven songs, but at least keeps the atypical flavor of the rest of the album. Revolution lays it down in a full-bore modern rock instant classic, complete with ultra-dynamic vocal line and some incredible harmony work. Think Queensryche with Sting singing lead and you have the general idea. The Urgency closes out with the solemn and searching Lullaby, perhaps the best writing on the disc.

The Urgency officially hits shelves in a couple of weeks. It's unfortunate that they are probably 20 years too late to meet their maximum commercial potential. Nevertheless, great music will always find an outlet, regardless of the markets and mores of a given generation. Tyler Gurwicz may be the most dynamic new vocalist of the year (we'll see), but there's no doubt you'll be hearing a lot of The Urgency this year. The Urgency is an excellent debut album, worthy of high recommendation and praise.
Rating: 4.5 Stars (Out of 5)

You can learn more about The Urgency on their home page or on MySpace. The Urgency goes on sale April 21, 2009. You can pre-order The Urgency at Amazon.com.
Posted by Wildy at 5:20 AM

nice jab on the review!