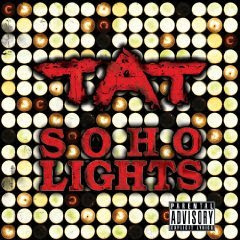 London, England’s TAT is a power trio led by the incomparable Tatiana DeMaria on vocals and guitars. With a distinctive rock voice that can smash-and-grab you or and melt butter on successive lines, DeMaria might be one of the best new female rock vocalists of the last few years. Add in Nick Kent on bass/vocals and Jake Reed on drums/vocals and you have a powerful power trio that mixes Classic, Punk and Melodic Rock sounds and strong harmonies. TAT’s debut album, Soho Lights was good enough to land them a spot on The 2009 Vans Warped Tour. They’ll be coming soon to an amphitheater near you. Be ready.

DeMaria has a penchant for lyrically dense, vocally dynamic songs that sound like they should be impossible to sing; DeMaria makes them look/sound easy. As a vocalist she has it all: Great tone, tremendous breath control and an ineffable front-woman quality that you see in big name artists such as Gwen Steffani and Chrissie Hynde. DeMaria could front most any band or go solo and make it big. In TAT she has an incredibly tight and talented rhythm section and backup vocalists who fill out the sound in dynamic and impressive fashion. Soho Lights opens with Road To Paradise, a lyrically dense Punk/Mod anthem that you won’t be able to get out of your head. Sympathetic Lies has an almost wall-of-sound quality in what I can only describe as a melodic Punk tune.

Pessimist may be one of the more amusingly pathologic songs on the album (“I’ll sit on your face and say I love you and leave you the next day for someone reminds me of you”). The energy here is off the charts. I Don’t Want To (Love You) is DeMaria at her most amazing, running off several phrases in a row, seemingly without a breath, without ever losing her sound or tone. A-maz-ing. Here’s To You is a pitch-perfect representation of ambivalence that features one of the best bass lines you’re likely to hear. Sandra D is an interesting bit of self-affirmation in song, while Take You Home pays tribute to Nirvana in sound. The album closes out with Live For Rock, which deserves to be the anthem for the next generation of rock/punk musicians. This is what Rock N Roll has always been about.

Wow. TAT will seriously blow you away. Soho Lights isn’t perfect, but even on the few more average songs the energy level is anything but. If you’re going to the Vans Warped Tour this year, make sure you check out TAT’s set. TAT alone might be worth the price of admission. In the mean time, be sure to check out Soho Lights. Rock is back, and its name is TAT.

You can learn more about TAT at www.myspace.com/tat or http://www.tatness.com/. You can purchase a copy of Soho Lights at Amazon.com, or you can purchase the download through iTunes. You can catch TAT live as part of the 2009 Vans Warped Tour between June 26, 2009 and August 23, 2009.
Posted by Wildy at 5:10 AM