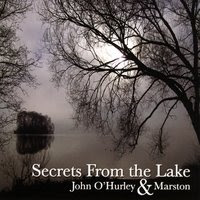 John O’Hurley is a man of many talents. He’s been on television and in movies since his run on a series of daytime dramas (The Edge Of Night, As The World Turns, Loving, The Young And The Restless) in the 1980’s. Best known for his role as J. Peterman on Seinfeld, O’Hurley was also a contestant in the first season of Dancing With The Stars. O’Hurley has hosted The Family Feud, been a guest co-host of Live With Regis & Kelly, and has even done voice work for shows such as Sponge Bob Square Pants, Father Of The Pride, Duck Dodgers and Buzz Lightyear Of Star Command. Oh yes, and then there are his professional theater credentials. He’s played Chicago’s Billy Flynn, as well as King Arthur in Monty Python’s Spamalot. Did I mention he’s also a well-known pianist and composer?

Secrets Of The Lake is the second collaboration between O’Hurley and renowned cellist Marston Smith. Their debut album, Peace Of Our Minds, as a big hit. It peaked at #13 on the Billboard chart for Alternative Classical music. Marston Smith has quite the impressive resume of his own, having recorded with the likes of KISS, Whitney Houston, Neil Diamond, Toni Braxton and Lionel Richie. Their second album, Secrets From The Lake, continues where Peace Of Our Minds left off.

John O'Hurley's compositions show the same dramatic flare that he displays on stage and screen. Even in quieter moments such as Forsyth Pond, O'Hurley captures a melody with theatrical implications. You can almost see the sunlight rippling on the water while a lazy bird rides the drafts overhead. Marston adds the perfect shading to this song. The title song, Secrets From The Lake, is full of cinematic themes and flourishes, like something that could have played in the closing credits of On Golden Pond. Waltz For The Man In The Moon is an inspired bit of writing, sounding like a lullaby. Marston steps forward to take the lead here in a warm and passionate performance, trading lines with O'Hurley's piano. My favorite track on the CD is Winterlake, with an ethereal, almost ambient synth wrapping itself around Marston's inspired cello play. Other highlights include Sailor's Suite, Variation On A Butterfly Aria and Cellian Cove.

John O'Hurley writes new age/classical compositions with the occasional touch of Broadway flair. O'Hurley's chops are undeniable, and Marston is a wizard with a bow in his hand. Secrets From The Lake is a thing of beauty; too good to just be background music and too alive to not listen to.
Rating: 4 Stars (Out of 5)

You can learn more about John O’Hurley and Marston at http://www.johnohurley.com/. You can purchase a copy of Secrets From The Lake at www.cdbaby.com/joam2.
Posted by Wildy at 5:10 AM