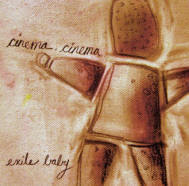 Brooklyn's Cinema, Cinema celebrated a new lineup and new direction in 2008 with the release of their third CD (and first full length release), Exile Baby. Paul Claro (drums) and Ev Gold (guitars/vox) navigate through ten songs that range from alternative rock to an ambient, avant-garde style that defies labels. The duo has showcased their sounds at numerous clubs around the New York City metro area and even at CMJ (for the third year running) in 2008.

Shine No. 1 is an ambient exercise that borders on aural psychedelia. Gold's vocals stretch to their limit as they soar over the musical landscape laid down here. RX is a driven modern rock tune full of jangly guitar and quasi-stream of conscious lyrics. Drydive builds from ethereal footstones into a driving, grungy rocker with a garage aesthetic. I Don't Wanna Be Your Boyfriend takes on a Punk aspect with a lot of sonic interference on guitar in a song that threatens to fly off the sonic rails at several points but never quite crashes. The sound throughout Exile Baby is lo-fi; the production values primitive, but the net effect is an intriguing and enjoyable listen. Other highlights include Hope Dies Last and Still/Life.

Cinema, Cinema brings the underground to your doorstep with Exile Baby. If you wonder what goes on in the basement studios and rehearsal rooms in a place like Brooklyn, this is a good example. A pop producer would do a lot with Cinema, Cinema's sound that might make them more commercial, but it’s highly questionable whether it would be an improvement in their sound. In artistic terms this is American Primitive music, and Cinema, Cinema has a unique sound that will appeal to folks in the Avante-Garde and Psychedelic music realms.
Rating: 3 Stars (Out of 5)

You can learn more about Cinema Cinema at www.myspace.com/cinematwice or http://www.cinemacinemaband.com/. Exile Baby can be purchased as a download through iTunes.
Posted by Wildy at 5:10 AM

i got "i don't wanna be yr boyfriend" off of hype machine a few weeks ago...damn, that guitar player shreds.