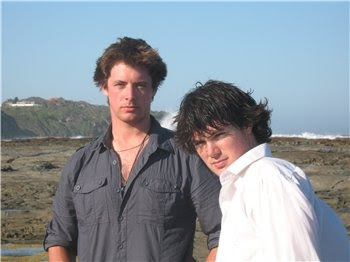 Kotadama is comprised of brothers Chris and Evan Brown. Legend has it that Chris taught himself to play guitar and keyboards in 2006, and then encouraged his brother to learn the drums. Kotadama (meaning spirit of words) was born. Chris and Evan Brown were born and raised on the central coast of New South Wales in Australia and have traveled the country extensively. In the latter part of 2008 and early part of 2009 they have created significant buzz in both the US and Europe, gaining airplay and exposure from numerous sources. Their debut album, What Does It Mean? is forthcoming.
The Demo EP opens with Three Simple Words, a plaintive paean to love with a distinctive melody and an interestingly orchestrated arrangement. The song is highly commercial and radio ready, although I was admittedly disappointed to hear the heavy effects on the vocal line. Golden Child displays a strong social conscience, calling out world leaders for knowing the sort of problems our societies face but choosing to wait for miracles to solve the problems rather than taking the steps necessary to ensure long term prosperity. See You Tonight is a sweet ballad that’s destined for mix tapes wherever it’s heard. Earth Vs. Man has an almost U2 air about it, exploring the ultimate clash between societies and the natural forces of the Earth. Land Of Dreams goes a more ethereal route, using harmonics and reverb to build a "dream" sound for the song to inhabit. Calm Before The Storm has a similar vibe, built around the earth and social conscience of Kotadama.

The songwriting here is excellent. Kotadama displays a distinct ability to craft songs that are socially apt and intelligent and commercially viable. The arrangements are lush and full of orchestral passages and structure. I was very concerned to hear what sounds like correcting software used on the vocal lines, as I can not be confident that what I hear in the vocals is the band as opposed to the software. For me, at least, this blanches the experience of what is otherwise a fine start for Kotadama.

You can learn more about Kotadama at http://www.kotadama.com/ or www.myspace.com/kotadama. What Does It Mean will be released sometime in Spring or Early Summer of 2009. For now you can catch their music on the radio in certain markets in the US, Canada and Europe, or you can stream songs on their MySpace page.
Posted by Wildy at 5:00 AM