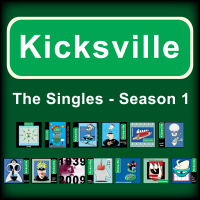 Kicksville is a musical collective of sorts, mixing organic and electronic instrumentation to cover some classic (and occasionally obscure) songs while rolling out some originals along the way. Current membership count is at 58, spanning 12 cities and 3 continents. This new musical underground started releasing weekly singles on their website in December of 2008. The Digital album The Singles: Season 1 consists of 13 tracks, available individually or as an album download. “Season 2” will begin on the band’s web site on April 25, 2009.

Season 1 opens with Phatty, an instrumental bit of musical madness in the same vein as The Miami Vice Theme. It’s not Jan Hammer, but it will definitely get your feet moving. Walking In Your Footsteps is one of two Police covers on the album and includes a verse I hadn’t heard sung before (although I believe it was included in the lyrics of the original liner notes on Synchronicity). This is a decent cover, but Kicksville trades some of the panache of the original for a dance beat. This is one of those songs that you don’t cover unless you can either nail the song as originally done or you really make it your own. Kicksville doesn’t quite manage to do either, but it’s still a pleasant listen. Backdoor Man is interesting for the mix of Country and Electronic styles. Kicksville’s cover of The Talking Heads’ Once In A Lifetime is enjoyable although it does sound a little bit canned, as if perhaps the producer suggested the song but the vocalist never fully bought into it. I liked their take on The Police’s Invisible Sun, although it does create a bit of cognitive dissonance. The song itself is contemplative and paranoid, whereas the vocals here are spoken/yelled in an urgent/angry tone that isn’t convicted.

The Singles: Season 1 is a mixed bag of songs, both literally and musically. Perhaps it’s the disconnection of having such a large group of musicians working together around the world, likely sending files back and forth rather than sitting down together in a studio, but there just isn’t the organic feel of a band here (yet). Kicksville is ready to embark on Season 2, and it will be interesting to hear what the explosive growth in the population of Kicksville will do to their sound. There is definitely some good stuff here, and some stuff you’ll have to wade through to get there, but as a musical/sociological experiment it is interesting to observe. There is a wealth of talent here. We’ll see where they go.

You can learn more about Kicksville at http://www.kicksville.com/ or www.myspace.com/kicksvilleband. You can download The Singles: Season 1 via Ropeadope Digital.
Posted by Wildy at 5:20 AM