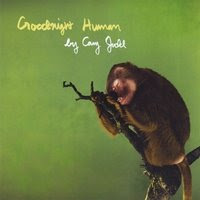 Cary Judd is a native of Thousand Oaks, California who has found a home on the Wyoming/Idaho border in the shadow of the Teton Mountain Range. Judd uses this lifeline to nature as impetus and inspiration in his songwriting, drawing moments from his life into song. Judd’s third album, Goodnight Human, presents some of these moments in snapshot style, drawn in non-traditional pop instrumentation yet with a distinct pop sensibility.

Judd marches to the beat of his own drummer, and I can’t say I was able to follow the beat at every point on Goodnight Human, but the album has moments that are absolutely inspiring. Judd’s instrumentation and arrangement style could best be described as Americana/Pop. Goodnight Human has a distinctive sound that borders on Country, yet the pop hooks and infectious melodies will make you want to get up and dance. The opening song, Andromeda, will make you wonder just what you got yourself into, but then Judd launches into The Apocalyptic Love Song, a tongue-in-cheek declaration of true love forever (seriously). Angel With A Cigarette is highly catchy pop music that’s a bit bizarre but highly listenable.

My favorite song on the album is Valentine, a well-written Pop/Americana song. This is definite mix-tape material; it’s a bit quirky and has real commercial potential. Flicker is perhaps the biggest potential hit on Goodnight Human with lush harmonies, a great arrangement and a highly danceable nature. Stars is another song with a memorable melody and harmonies and a powerful pop arrangement. Other songs of note are Huang Shan (The Ah-Ha Song), Sarah, Kiss Comes To Shove and A Time To Lie.

Cary Judd carves out a musical niche that’s not well populated on Goodnight Human. Since the emergence of Americana as its own genre artists have been toying with it and stretching the boundaries, and many have taken it to the pop side, but perhaps no one has done it as well as Cary Judd. Goodnight Human is a mixed bag: just about half the tracks here are average, and there’s nothing here that will turn listeners away, but there are six tracks on this album that are golden. Flicker and Valentine could put Judd on the map; both songs could do well on commercial radio or licensed into TV or Films. The sound that Judd has crafted is, if not unique, rare. Cary Judd will turn heads and hearts with his music.

You can learn more about Cary Judd at http://www.caryjudd.com/. You can purchase a copy of Goodnight Human at www.cdbaby.com/cd/caryjudd3.
Posted by Wildy at 6:34 AM

I have been listening to CJ for the last few years and Goodnight Human is amazing. I dig the sound he brings to Ah-ha and Valentine. I was at the CD Release show and he rocked it. Cary is a sleeping giant ready to explode.

"The sound that Judd has crafted is, if not unique, rare. Cary Judd will turn heads and hearts with his music." I think this hits it on the head. The thing about Cary's music is that it continues to grow on you. You love it at first, but then the more you listen the more you love it. Thanks for the review.

I have the CD Goodnight Human, and listen to it constantly. The songs are very well written and catchy, and all have thier own sound. I have seen Cary perform a couple of times, and he is amazing to watch. What is amazing about his music is that it is totally his, he does it all. I agree that he is a sleeping giant ready to explode.

Americana bordering on country? I didn't really get that from listening to it. I was interested because of your review, but your review is confusing to me, either way thanks for the recommendation, this is a brilliant album. Funny how different people hear different things.

I welcome comments on reviews, but do request that comments and responses be respectful, both of the writer and of other folks who choose to comment. Contributors who don't show basic respect and civility will be removed.

That being said, there is a distinctive yet subtle Americana thread that runs through the album. It might not be the first thing you pick up on, and it doesn't necessarily touch on every song, but it's very much there. It's one of the more intriguing aspects of the album, in my opinion.