Review: Marian Call - Got To Fly 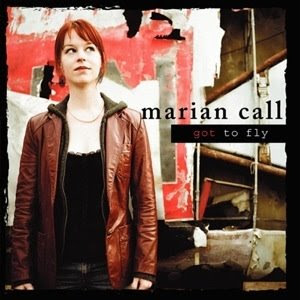 Marian Call - Got To Fly
2008, Marian Call/Quantum Mechanix
Marian Call is the fiery-haired chanteuse from Alaska responsible for last year’s Vanilla, Wildy’s World’s Album Of The Year for 2008. The Anchorage-based singer-songwriter has continued to branch out into the lower forty-eight, with recent or upcoming shows in Colorado and Texas. Her sophomore album, Got To Fly, is something of a geek tribute album. It includes all original material inspired by shows/movies/books such as Firefly, Star Trek, Lord Of The Rings and Battlestar Galactica, to name a few. Don’t write off Got To Fly based on her inspiration, the album is amazing.

Got To Fly opens with I'll Still Be A Geek After Nobody Thinks That It's Chic (The Nerd Anthem), a wonderfully retro-mod anthem that drops references to The Lord Of The Rings, Star Trek, Steven Hawking, Galileo and Van Gogh. The Nerd Anthem walks the line of novelty song but is just too well written to really be considered such. It doesn't hurt that it's call's dulcet voice singing the words, but the song is as much serious social commentary as it is a celebration of nerd-dom. Good Old Girl opens with a furtive passage that opens into a theatrical coffee house missive and the sort of affection that fictional characters inspire in fans. Call's harmony vocals are gorgeous. Don't Try is romantic advice for Firefly’s Simon Tam and Battlestar Galactica’s Billy Keikeya, but is a lovely ballad built on a plaintive piano and angelic vocals.
Dark Dark Eyes is a mix-tape love song if ever there was one; a classic folk ballad. Fans of Marian Call's first album, Vanilla, might be a little wary of an album with sci-fi and fantasy themes, but this isn't a hack tribute album. Got To Fly pays its tributes with the songwriting and performance quality we've come to expect from Marian Call. Call herself expressed a little trepidation how this album might be received, but that concern is baseless. Call is such a great storyteller, and the tributes or parallels are subtle and well-written such that most listeners won't get most of the references unless they are fans of the particular show, writer, etc. Vera Flew The Coop is an epic story inspired by Firefly, but again, unless you’re a fan of that particular show it’s just a highly interesting story song with Call's amazing voice lulling you in. The same goes for Its Good To Have Jayne On Your Side, which has a bit of an old-school country feel to it. Call has crafted another story song inspired by Firefly that is likely to be covered by other performers.

In The Black could be the anthem for the black sheep of family, but is also based on the television drama Firefly. Call weaves her story-telling magic in another song that is destined to be covered over and over. I wouldn't be entirely surprised to hear In The Black licensed for television or movies either; it's that well done. Got To Fly is the breakout song of the album. Call outdoes herself in a composition that is so complex and stylistically mixed its hard to keep up with. Lyrically dense, Got To Fly is a vocal master class from Call. Lesser vocalists couldn't even get through the song, but Call belts, coos and croons like the song is her second nature. I had this one on repeat for almost an entire day at one point as comprehension ran its course into awe. Call closes out with It Was Good For You Too (blues version), in a classic torch performance that will blow you away. Based on Firefly’s Yo-Saff-Bridge, It Was Good For You Too is destined to be a fan favorite. This is another song that is bound to be covered, licensed and spread virulently by suggestion.

When I first heard Marian Call was releasing a project that was a tribute to Sci-Fi/Fantasy television, movies and books, I have to admit I was a little skeptical. Most any other artist I would have simply let it pass, but I know some of McCall's work. Unless you’re a big fan of the material that inspired a particular song you'll never know the song is a tribute. What you will understand very quickly is that Marian Call is a rare talent. I don't know if there is anyone else currently in pop or folk music quite like her. Got To Fly is a highly limited release (1,000 CDs) without any current plans to reprint it, but if you're a fan of great songwriting and great performance you need this disc. Got To Fly is a surprising Wildy's World Certified Desert Island Disc. Don't miss it.

You can learn more about Marian Call at http://www.mariancall.com/ or www.myspace.com/mariancall. You can purchase a signed, limited copy of Got To Fly (only 1,000 copies made) through Quantum Mechanix.
Posted by Wildy at 5:20 AM

For my part one and all must browse on this.