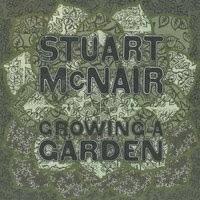 Birmingham, Alabama based Stuart McNair explores traditional Country music themes and values as well as Earth-friendly topics on his debut CD, Growing A Garden. Recorded live, in-studio with just McNair, his guitar and harmonica, listening to Growing A Garden is like having McNair over for a house concert. The organic feel of the album and the honest, down-home songwriting and performance lend a certain charm to the 18 songs presented here.

Growing A Garden opens with The Birds Were Like A Symphony, a song of appreciation for the beauty of nature, and the way that the Earth around us every day can surprise us when we simply take the time to notice. McNair's voice is strong and clear and has a rugged beauty to it. Man On A Mission has an autobiographical element to it, explaining perhaps, why McNair makes music. There's a great classic folk sound here and McNair reminds me heavily of David Matheson on this song. Somewhere In The Middle is a personal favorite, probably the best "opposites attract" song I've heard. I guarantee you there will be couples out there that claim this song as their own. It's not a humorous song, per se, but you can't help but chuckle at some of the truths unveiled here.

Don't Worry is a highly positive message set to music; a song about change and being yourself and letting the big things settle themselves out. It's not an invitation to disengage from life, rather one to engage and let the tides come and go ("One day I decided to be free/One day I decided to be me/One day I finally took my place/not ashamed to wear a smile on my face/and you'll be smiling a lot when you get the word / God loves every dog, cat, fish and bird/He walks right beside you and you've never been apart/so don't worry, worry, worry too much with your pretty little heart.") Hearts Don't Lie speaks to the inner voice that we sometimes call our heart and how it never lets people down even when they fail to listen.

You Need To Be Danced With is destined for mix-tapes everywhere. Don't be surprised if this song gets licensed for Television or Movies, as it is probably one of the most romantic love songs I've heard. As is it could be a hit on country radio and quite possibly cross over to pop radio as well. Grow The Garden is all about tending the future through the actions of today, and could be applicable to personal growth, societal growth or even growth in a relationship. It's a beautiful song and well delivered. Didn't Know You Then is a powerful song about forgiveness and accepting people for who they are and not necessarily for who they once were. Walking With Jesus has the feel of a modern folk hymn; more of a story song than what passes for contemporary Praise music. The most interesting aspect of McNair's music may be the role that faith plays in his songs. It's obvious that faith is a large part of McNair's mindset, and he sings about it as he feels moved in his songwriting in much the same way that James Taylor sings about love; it just happens to be what's on his mind. Be sure also to check out You Make Me Smile, I'll Be Back, Eating Me and How YOU Do It.

Stuart McNair is an honest songwriter who writes what he knows. There's no attempt to put forth a persona here, McNair is what he is, take it or leave it. The image that comes across is a singer/songwriter who is happy with his lot in life; happy with who he is, and happy to share his stories with any who will listen. McNair touches on elements of life, love, faith and our communion with nature. How McNair isn't highlighting major folk festivals across North America I don't know, but I suspect the time will come. In simple, straight-forward fashion, McNair has created an album that should establish him as one of the best young talents in folk music, bar none. Growing A Garden is a Wildy's World Certified Desert Island Disc, and highly recommended to anyone who will listen.