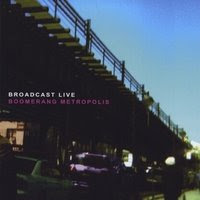 The Albany, New York region has long held a relatively un-noticed well of musical talent (perhaps due to its relative proximity to New York City). Artists such as Sirsy, Rosanne Raneri, Denise Culhane, Matt Smith, The Figgs, The McKrells, Katie Haverly, Eric Margan & The Red Lions, Peter Davis, John Nazarenko and Jeff Halstead have been consigned to trying to go outside of the area to gain significant attention or accepting the local market as something of a boundary. Some have done well for themselves; The Figgs have been together for close to twenty years now with multiple releases to their name and an extended gig as Graham Parker's touring band. Sirsy has made a long and successful career as a highly sought after Indie Act on the Eastern seaboard with significant critical acclaim. Matt Smith left for New York City and wound up as a highly sought after session guitarist. Nazarenko and Halstead still make music and double as educators. The McKrells are still together although not in their original and most dynamic form. Peter Davis continues to teach and play music running the gamut from Dixieland Jazz to country, folk and Rock N Roll. Denise Culhane had her career interrupted by health issues but continues to make music. Even some solo musicians have caught on, with two Saratoga Springs natives catching on with big bands. Dorian Crozier spent some time as touring drummer for The Rembrandts and has recorded with numerous artists, while Scott Underwood is the drummer for Train.

The point of all of this is that there is a wealth of under-noticed talent in the Albany region. I am certain there are several I have forgotten or overlooked as I haven't lived in the area in a few years, but the area continues to have a vibrant music scene. The latest band to make some big noise out of this small market is Broadcast Live, with their heavy dose of social commentary and atypical mix of Hip-Hop, Rock and Pop. Lead singer and resident urban poet laureate Victorio Reyes lists influences that range from KRS-One and Dead Prez to Bob Dylan, Bob Marley and Tracey Chapman. Even some of his raps have a very musical quality to them; spoken word with the cadences of a singer. The band is filled out by Gaetano Vaccaro (guitar, drums, and bass); Seantel Chamberlain (drums, bass, guitar, vox) and Jory Leanza-Carey (drums, guitar, vox). Suffice it to say that a live show could be interesting with members playing musical instruments both during and between songs.

To the music; Broadcast Live is as groundbreaking and unique in sound as Gym Class Heroes were when they first appeared on the scene, but with a wider range of sounds and more powerful social slant. Boomerang Metropolis opens with the title track, which compares landlords and bankers to drug dealers, implying that all trap people into need based relationships that working folks can't afford but can't afford to get out of. This song appears to be about the current "gentrification" trend in New York City where landlords buy cheaper properties in poorer neighborhoods and start the process of raising rents. This has the net effect of pushing the working class, the poor and a disproportionate number of minorities to furthest edges of the City and beyond. This isn't happening just in New York, but New York might be the place where it is most apparent.

One Metaphor sounds like a mellow pop song from the outset, an autobiographical soliloquy about the cathartic effect of writing for Victorio Reyes. It is a reminder that communication can be the most important means to overcoming adversity and moving beyond wherever you are. Spoken Vision is a musical call for unity that is a highly infectious listen. This song is radio-ready and could be a potential hit. A Bronx Tale is about doing the right thing, the best way you can, regardless of the cards you've been dealt. It's a sweet musical arrangement with some great piano work and a strong melody in the chorus. Commonplace attacks the mindset of prejudice, excusing no one in the process. Perhaps the biggest surprise of the album is the thrash-punk mayhem of Harry Potter Is Black, which closes out with something that sounds like Dobby The House Elf beat-boxing. Pledge Of Allegiance is done Body Count style, turning from the ideological roots of the US to an ironic statement of the darker hours of our collective history. Other highlights include the singer/songwriter style of New Orleans, Semiautomatic and Willie Lynch.

Broadcast Live takes you down to street level; not the glorified Gangsta culture version, but the real people trying to live day-to-day street. With songs yearning and entreating for social justice, Broadcast Live initiates a new-sounding hybrid of Hip-Hop, Pop, Latin and Rock that is bound to garner critical attention and praise. The music is organic from start to finish; the songs alive with real people and real places. You can't help but caught up in Boomerang Metropolis. Well done.

You can learn more about Broadcast Live at http://www.broadcastlive.org/ or www.myspace.com/broadcastlive. You can purchase a copy of Boomerang Metropolis at www.cdbaby.com/cd/boomerangmetropolis3.
Posted by Wildy at 5:20 AM