Review: On Ensemble - Ume In The Middle 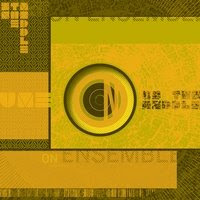 On Ensemble is a rarity in the realms of popular music; they are wholly original. Ostensibly a Taiko ensemble (ancient Japanese drumming), On Ensemble mixes that venerable art with Hip-Hop, Rock and electronica to create sounds very few people have heard before. Lauded by Modern Drummer magazine for their groundbreaking work, On Ensemble members individually have heady resumes, having music featured on the TV show Heroes, in the David Mamet movie Redbelt, and even performing with Stevie Wonder at the 2008 Democratic National Convention. On Ensemble's latest effort, Ume In The Middle will be available May 5, 2009. It's sure to be a big seller in the World and New Age genres, and is a great opportunity to check out both an ancient musical style not often heard in the west and new construct sprouting from it that's worth noting.

Ume In The Middle opens with the dark and ominous Yamasong, with its shadowy ambient sound based in crawling progressions and traditional chants. Hisashi is a rhythmic exploration lead by traditional Japanese flute. This song sounds like the sort of music that gets written for background to introductory scenes in feature films set in Japan. Waiting takes a big jump into the twenty-first century, mixing Taiko with electronica to create a rather funky mix. The vocals here are more in the Pop/R&B realm with some pretty neat harmonies going on. Hiroya vs. Miniboss gets into the techno realm, bordering on light industrial at times. Techies will get a kick out of of Butoh-bot Malfunction, a sonic exploration of the breakdown of modern machinery. This is probably one of the more imaginative compositions in the album while being resolutely one of the least musical. It isn't until the eighth track, Bounce Back that On Ensemble breaks somewhat free of the electronic universe in which they've ensconced themselves. Bounce Back is still strongly electronic but at stays with the traditional style of their musical roots. The album closes out with a Campagna remix of Yamasong.

On Ensemble is intriguing, although I felt they spent a little too much time in the electronic universe and not enough exploring the many shoots and branches that run from their roots. Nevertheless, Ume In The Middle is an intriguing and interesting listen. Electronic music fans are likely to go nuts over Ume In The Middle while traditional Taiko followers will likely view it with suspicion on their way to acceptance and enjoyment. The composition and presentation are inspired.

You can learn more about On Ensemble at http://www.onensemble.org/ or www.myspace.com/onensemble. You can purchase a copy of Ume In The Middle at www.cdbaby.com/cd/onensemble5. You'll be able to find the CD in stores as of May 5, 2009.
Posted by Wildy at 5:00 AM