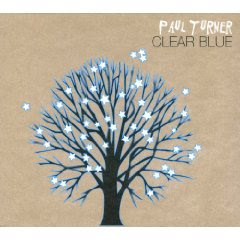 Sydney, Australia's Paul Turner took the circuitous root to a music career. While backpacking across America, Turner happened to hear Mason Williams' Classical Gas while staying in a San Francisco hotel. Falling immediately in love, Turner vowed to learn to play the song on guitar (he'd not played before). Returning home to Australia, he started guitar lessons. Upon conquering Classical Gas, Turner realized he'd found an avenue of expression he'd not imagined before. Soon Turner was touring as an opening act for bands like Midnight Oil and getting airplay from outlets such as Philadelphia's WXPN. In October of 2008, Turner released his debut album, Clear Blue, in the United States. One word: Wow.

Listening to Turner play guitar is revelatory. He dresses his brand of singer/songwriter rock with incredibly intricate and complex guitar parts, constructing songs that are epic short stories set to amazing guitar-based arrangements. Clear Blue opens with City Lights in a gorgeous finger-pick arrangement. Turner's voice is strong and clear and soars over the music like a bird over the ever moving streets his music seems to portray. Be Happy is a love song of sorts. It’s not your typical romantic ballad but much deeper, expressing a much deeper meaning of love that tends more to the universal than the individual. Turner delves deep again on Angels Cry, a lushly arranged song with deep philosophical roots. This might be the loveliest arrangement on the album, although it kept making me think of Seal's Don't Cry for some reason.

Love Meteorite is a must hear. The complex guitar work, amazingly memorable medley and intelligent lyrics make this song an absolute keeper. This is mix-tape material, but there may also be a religious sub-text here that's quite deeply planted if intentional, or perhaps quite telling if it is not. Room is my personal favorite on Clear Blue. The vocal is haunting on a par with Chris Isaak's Lady In Red, and the guitar/cello/voice arrangement is perfectly conceived and delivered. Other highlights include Come With Me, Carcassonne and the instrumental, Clear Blue.

Paul Turner is a distinctive talent. His writing and guitar play may take a musical background to fully appreciate, but are accessible to anyone with the time and space to listen. Turner's voice is hauntingly beautiful and soars over his songs in unrepentant fashion. It's really hard to think of contemporaries for Turner, because there aren't many writers/performers with the level of virtuosity that Turner shows on Clear Blue. Names like Paul Simon and Sting come to mind, but Turner also calls up folks like William Ackerman for his out-of-the-box guitar style. However you choose to classify him, you'll be happy you listened. Clear Blue is a Wildy's World Certified Desert Island Disc. Don't miss it.

Learn more about Paul Turner at www.myspace.com/musicbypaulturner. You can purchase a copy of Clear Blue at Amazon.com.
Posted by Wildy at 5:29 AM