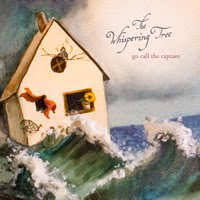 Go Call The Captain opens with “By The Side Of The Road”, a solid folk/rock tune that seems like a likely first single from the album. “So Many Things” is a great taken on commercialism and consumerism. The song is vibrant and very well written, but the highlight of the song and the disc really, is Kleiner’s voice. Eleanor Kleiner has a voice full of warmth, with tremendous tone and an almost angelic beauty. That voice carries “Song To Silence The World” in spite of a distinct lack of energy. “Go Call The Captain” is a SongDoor songwriting competition winner, and takes on the corporate world in obsequious and sometimes awkward terms. The best song on the CD is “Slide”, a funky pop tune with acoustic instrumentation and a light hip-hop beat. Brangbour is the life of this tune, offering a vibrant bass line that enlivens the song as an equal partner to Kleiner’s gorgeous voice. This is a potential hit. “Soon” and “Washed Ashore” close out the album on a quiet note, neither able to live up to the level of “Slide”.

Go Call The Captain is a solid introduction to The Whispering Tree. Eleanor Kleiner has a voice you could listen to all day, and Elie Brangbour helps to build a vital base for Kleiner, at times supporting her and at times offering a vital contemporary voice to the songs. Go Call The Captain is a bit uneven on the songwriting side, but there’s a definite chemistry between Kleiner and Brangbour that serves them well and should continue to do so many albums into the future.
Rating: 3 Stars (Out of 5)

You can learn more about The Whispering Tree at http://www.thewhisperingtree.com/ or www.myspace.com/thewhisperingtree. Go Call The Captain drops on April 6, 2010. Keep checking the band's website for availability.
Posted by Wildy at 5:00 AM

I love this band! There are no fillers on this album, which is really rare...I actually enjoy all of the tracks. One of the best bands I have heard in the last 10 years.

Gosh, there is so much useful data above!