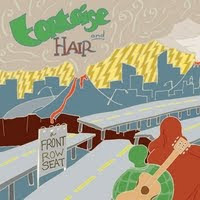 Husband and wife duo Adrienne and Dustin Cottrell, also known as Tortoise And Hair, hail from Marietta, Georgia and have been charming audiences in the Southeast United States for a decade now. The Cottrells studied together at Florida State University; each are classically trained musicians with a shared love of some of the great singer/songwriters of Rock N Roll era (Leonard Cohen, Joni Mitchell, Bob Dylan, Gillian Welch, etc.) Tortoise And Hair uses a distinctive sense of melody, witty and insightful lyrics and their own special chemistry to open ears, minds and hearts on their debut album, the self-produced Front Row Seat.

Front Row Seat does display a certain distinct chemistry, but its duplicity is fetching. For all the chemistry on the album, it really is more like listen to two distinct artist's solo albums on shuffle. Adrienne Cottrell leans more toward a Folk or Easy Listening sound, relying on the deft imagery in the lyrics and her angelic voice to entrance a crowd. Dustin Cottrell is a closet Rock N Roller. He plays along well on the more Folk-oriented material, but you can hear the enthusiasm in his guitar on the more Rock and Blues sounding songs. When the Cottrells sing together, however, there is no doubt they are together, as their voices intertwine and blend as if caramelized together by the music.

Front Row Seat opens with Traveling Song, a paean to finding home in the midst of love no matter where you might be. The arrangement is a sweet Maritime Celtic ballad and Adrienne Cottrell pays epic tribute with her voice. Dustin Cottrell takes over on Faultline '09, an edgy bit of Urban Folk with a touch of Blues. The song is as catchy as anything you might hear. Watching The World Fall Apart is a mellow shell for a blend of voyeurism and schadenfreude that may be an indictment of financial collapse of 2008 and those who brought it about. Watching The World Fall Apart is sublimely tuneful and holds a wealth of finely meted our bitterness in its grasp.

Confessor explores misplaced faith and the inherent need of even those who claim no faith to be absolved of their guilt. The song is a passive-yet-powerful story about one lost soul who keeps running to another in times of doubt, only to return when his well of certainty runs out. Adrienne Cottrell is out front on this one, a convincing and vaguely chilling story song that will stick with you. Big Picture is self-explanatory, a song that attempts to put life's little problems into perspective. Dustin Cottrell takes the lead with extensive harmonies from Adrienne. Voice Of The Wind is perhaps the most unusual track on the disc, built from a martial beat, an ethereal arrangement and a whirling collection of guitar riffs. No One Else In The World recalls a simpler time and focuses on self-fulfillment. It's not a flashy tune but flat out great songwriting.

Forever Yours is a powerful love song with perspective. Adrienne Cottrell ruminates on the changes that life brings yet returns to the one constant in her life: love. Forever Yours is likely to wind up on mix-tapes, dedication lines and any other method people can use to dedicate songs to one another. Lady Midnight is far and away the best songwriting on the disc; a wonderfully poetic representation of the doubts that strike us all in the hours between dusk and dawn. Adrienne Cottrell uses powerful imagery, vulnerability and an amazing voice to paint a picture that is many times greater than the sum of its parts. The song and performance are utterly brilliant. On Limbo, Tortoise And Hair explore the existential angst and self-doubt that accompany one of the many transitions from youth to adulthood. Dustin Cottrell is out front this time in a tune that sounds a bit like mid-1970's Billy Joel. For Once In My Life has an easy Piano/Jazz feel. It's a song about escaping all of your bonds for a little while; just being able to be, and is probably a daydream most concoct from time to time. Tortoise And Hair close with Just Another Road, a plain and plaintive closer that hides s quiet sense of hope that will grab you.

As a listener I was quickly drawn into the inner life of Tortoise And Hair. Like many of the troubadours before them, this duo breaks down barriers with honesty, intelligence and wit, all wrapped in tremendous melodies and supple arrangements. Front Row Seat does feel like two distinct artists at times, but even where this dichotomy exists, the sense of chemistry between the two never fades. Adrienne Cottrell writes and interprets brilliantly, and Dustin Cottrell brings an edgy sense to the duo that seems initially out of place but quickly melds itself seamlessly into the sound. Tortoise And Hair are a duo not to be missed.

You can learn more about Tortoise And Hair at http://www.tortoiseandhair.com/ or www.myspace.com/tortandhair. You can purchase Front Row Seat as either a CD or Download from CDBaby.com.
Posted by Wildy at 5:20 AM