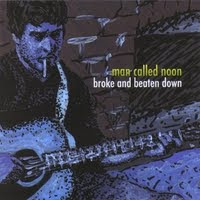 Herndon, Virginia's Anthony Giamichael takes to the stage under the name Man Called Noon. He has been compared stylistically to folks such as Springsteen, Tom Petty, Weezer, BoDeans and Soul Asylum, although Man Called Noon is rawer than any of them. Striving to tell stories as well as creating intriguing melodies and arrangements, Man Called Noon comes across as a highly personal and emotive singer on his debut album, Broke And Beaten Down.

Man Called Noon opens with Burn And Grow, a catchy, Lo-Fi anthem about wanting more for yourself out of life. An affable melody with buzzing guitars and a compact, Brit-Rock feel set a great pace here. Dance Off is a strong arrangement that's catchy, but gets dragged down by an uncommitted sounding vocal line. Living My Obsession is catchy and danceable; a song about a serial killer that may border on creepy for some listeners. The vocals are a bit off from the song itself, but the disjointed feel this creates works very well with the subject matter in question. Dying For My Passion is something of a sequel, with the brother of a victim of the serial killer in Living My Obsession seeking and getting revenge. The song starts out highly promising, with just Giamichael and acoustic guitar on opening, but breaks down into a repetitious fugue at the end.

Man Called Noon sounded seriously like Everclear on Cotton. The vocal line is a bit whiney, but works otherwise with the album. The best songwriting and performance on the CD is Broken Man. Broken Man has a raw, fun feel. The Rum-pot Folk/Pop arrangement carries a Blues sensibility. Man Called Noon winds down with The Lonesome Gods and settles on Another Ghost; a simplistic and repetitive tidbit that serves as a buffer for the untitled hidden track.

Man Called Noon succeeds because Anthony Giamichael is fearless as a songwriter. He’s unafraid to tackle unusual subjects or perspectives in his songs. This sort of risk taking can lead to stupendous failure, and sometimes, raving success. I’m not sure if Giamichael has honed his craft as a songwriter enough yet to capture that big moment, but he’s on the right path. Broke And Beaten Down shows flashes of brilliance, a lot of solid songwriting and a dog or two, but on balance it’s a great start that should lead to bigger and better things down the road. Giamichael’s voice is enigmatic and may rub some the wrong way, but in much the same fashion that Neil Young and Bob Dylan have over the years (I wouldn’t say it’s held either of them back). Man Called Moon might just have quite the future in front of them.

You can learn more about Man Called Noon at www.myspace.com/mancallednoon. Broke And Beaten Down is available via CDBaby or as a download from iTunes.
Posted by Wildy at 6:37 AM