Review: The Gilded Palace Of Sin - You Break Our Hearts, We'll Rip Yours Out 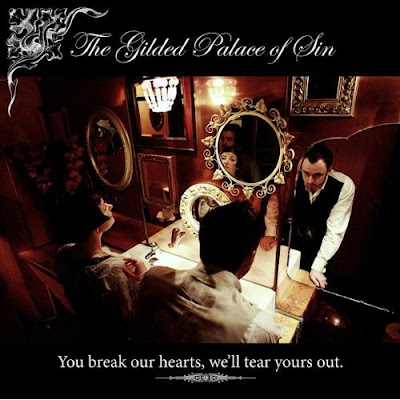 The Gilded Palace Of Sin - You Break Our Hearts, We'll Rip Yours Out
2010, Central Control

There is music and there is art. The Venn diagram between the two varies from band to band and from album to album. Periodically an album will come along that will bring those circles completely together, even for but a moment. On their debut album, You Break Our Hearts, We'll Rip Yours Out, England's The Gilded Palace Of Sin dances through transcendent moments to create one of the most satisfying Rock-noir albums of the new year. You Break Our Hearts, We'll Rip Yours Out is offered up By Barry Adamson's (Magazine, Bad Seeds) Central Control label.

The Gilded Palace Of Sin opens with the ambient electro-rock of For When We Forget, a haunting and beautiful peace that suggests itself in much the same fashion that an opening movement to a film score will do. Rosa Salvaje explores longing and loss in human terms full both of pain and dark hope. Mean Old Jack is a classic story song along the lines of Bad Leroy Brown. The arrangement here is a simple Blues/Rock workup, but vocalist Pete Plythian keeps it interesting with a dynamic and memorable performance. The song runs a bit long, clocking in at over eight minutes, but the pacing and performance with distract you from this outcome, even as entropy follows a Theremin over the edge in the final minute and a half of the song.

Rubbing Up is a paean to dogged determination set against a dark and dreary musical landscape full of sense of unrealized hopelessness. The static nature of the melody is a bit trying, but the musical construction around it is worthwhile. There Is No Evil There Is No Good develops from chaos into a loosely structured treatise on pragmatic humanism. The broken clock sounds of the back of the refrain suggest a cracked worldview approximating the suspension of perspective suggested by a funhouse mirror. Bones Of The Saints is a disturbing tale of intentions that are far out of line with the peaceful, ethereal arrangement. Acts that give pause are stated, even invited with the simple clarity that accompanies either the utter loss of hope or insanity.

On Wedding Rice, The Gilded Palace Of Sin gives a recitation of life events of the song's invisible subject; the effect would work if a coherent story arose from the one-sided conversation, but what is offered here is either to explicit or too allegorical to connect with listeners. Nautilus represents a transition (albeit) to an electronic style that's vaguely reminiscent of Thomas Dolby. The air of hopeless expectation that envelopes the album seems to flow from this song; a memorial to all that's gone wrong and all that's yet to. The Gilded Palace Of Sin closes out with Home Because You're Here, a post-modern love song with apocryphal overtones and a single shaft of hope growing out of the dark morass of emotions swirling about You Break Our Hearts, We'll Rip Yours Out.

All and all, You Break Our Hearts, We'll Rip Yours Out is a solid musical experience that walks right up to the edge of chaos and invites it in in small measures. The result is bleak rock with a creative streak that will exasperate and surprise you. The Gilded Palace Of Sin will push you to the brink of frustration, only to snap you back like a musical yo-yo into their hands; all through the scope of a worldview that would cheer up Robert Smith.

You can learn more about The Gilded Palace Of Sin at www.myspace.com/thegildedpalaceofsin or http://www.centralcontrol.co.uk/. You can purchase You Break Our Hearts, We'll Rip Yours Out as either a CD or Download from Amazon.com.
Posted by Wildy at 5:10 AM