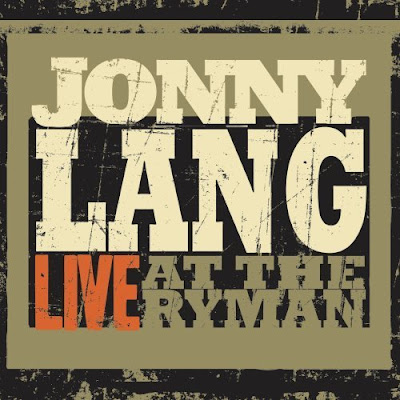 Jonny Lang was a phenom when he broke onto the national scene in the mid-1990's, displaying blues guitar chops and a voice that rivaled artists many years his senior. Now an established artist with half a dozen albums under his belt, Lang is one of the guitarists that young up-and-coming axe men hope to be compared to. In spite of all the success Lang has had over the years, the consensus has always been that his greatest moments are on stage. Concord Records attempts to catch the magic of a live show with the release of Live At The Ryman on April 20, 2010.

Live At The Ryman opens with “One Person At A Time”, a great blues/rock tune that sounds fantastic in a live setting; danceable rock and roll featuring outstanding axe work. “Bump In The Road” is a strong tune that is buoyed by the vocalists around Lang. Lang sounds great on his own, but his backing vocalists fill out the sound in almost magical ways on this rocker with a disco vibe. Gospel, rock and blues blend into a waltz for the positive vibe of “Turn Around”, a song so anachronistic stylistically that it works better than you might guess. Lang covers Tinsley Ellis’ “A Quitter Never Wins” in fine fashion, although his guitar work sounds more like Stevie Ray Vaughan than anyone else on this tune.

Lang revs it up on the funky “Don’t Stop (For Anything)”, plowing through big testosterone-laden guitar licks in an early 1970’s style and adding some highly soulful vocals into the mix. The gospel influence returns on “Thankful”, mixing with funk and soul on an entertaining but highly repetitive tune. The best performance on the disc might just be the wide-open funk and soul of “I Am”; you might find yourself losing a few minutes as you sink into this one. Lang ends up the show and album with his first hit and signature song, “Lie To Me”, in a five-and-a-half minute version that features the most expansive guitar work on the album.

Jonny Lang and his band show tremendous chemistry on Live At The Ryman, running through eleven complex and entertaining songs and making it sound like the easiest thing in the world. Lang has blossomed into a consummate performer with a distinctive voice and a guitar style that incorporates subtlety and power in equal and complementary measure. Live At The Ryman captures Lang’s stage presence well, owing to an outstanding performance to capture as well as talented production, engineering and recording staff. If Jonny Lang is new to you, then Live At The Ryman is an essential starting point. If you’ve seen Lang play live, then Live At The Ryman is everything you’d expect or hope it to be.

Learn more about Jonny Lang at http://www.jonnylang.com/ or www.myspace.com/jonnylang. Live At The Ryman drops on April 20, 2010. Pre-orders are available through Amazon.com, but expect wide availability in multiple formats.
Posted by Wildy at 6:03 AM