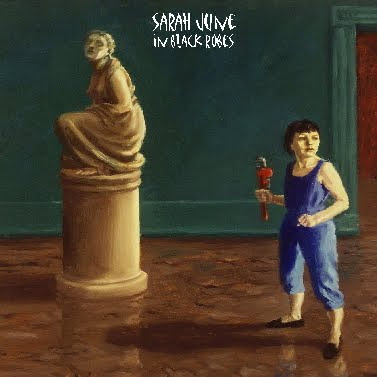 Sarah June is a product of her environment growing up. As a child in the urban wasteland of Detroit, June was surrounded by a city on the decline. Like any flower that grows up in the cracks of the street, in order to survive as an artist Sarah June needed to transplant herself. Chicago came first, but Sarah June ultimately settled in San Francisco. With a subtly intricate acoustic guitar style and a voice that will make you think she's a young, uncertain child, June spins the sort of webs in song that grow from a childhood spent in a land where hope is a memory. Sarah June's sophomore album, In Black Robes finds the artist embracing her voice as a songwriter and opening up to the world as unfurling to the morning sunlight.

In Black Robes opens with "Cowboy", a song that's more fulfilling musically than lyrically. It's an odd start, but befitting of what is to come. "Crossbones In Your Eyes" is exceedingly odd lyrically, but there's something magnetic about the song. You'll find yourself revisiting this one based on an elusive and obscure beauty that hides within. One of the highlights of the album is "From My Window High", a love song written from afar to multiple people. The song is very unusual, combining a pining vulnerability with a genteel creep factor that's ultimately harmless. Sarah June gets inventive on "Bluesy Melody", a nice change of pace from the more introspective material that haunts In Black Robes.

Sarah June shows a fine touch for imagery on "Paper Lantern", an angst-filled tune that queries the future for answers that will only come in time. "In Your Chevrolet" seems like it might connect with "Crossbones In Your Eyes", and it's difficult to tell whether the song is full of subtle innuendo or just atypical imagery. The stark harmonies of the song are lovely and disturbing all at once. "Motown" finds Sarah June offering words of encouragement to her hometown. Closing out with "'Til You Hit The Pavement", Sarah June goes out with a bit of attitude in a powerful tune that will leave you with a strong impression of the artist.

In Black Robes has a number of levels of meaning. Depending on your age, perspective and tastes it's going to appeal to different people in different ways for different reasons. The juxtaposition of a world-weary world view with Goth tastes and a vulnerably sweet, child-like voice is interesting enough to pull most listeners in for at least a few songs. Sarah Junes misses once in a while, but in general the songwriting is quite strong. In Black Robes was recorded entirely solo in Sarah June's apartment, and the stark simplicity and isolated feel of the recording lends it significant power. Whatever your final opinion, In Black Robes and Sarah June will make a distinct impression on you.

You can learn more about Sarah June at http://www.sarahjune.net/ or www.myspace.com/sarahjunesound. You can purchase In Black Robes on CD from Silber Records. Downloads are available through iTunes.
Posted by Wildy at 5:10 AM

To my mind one and all must go through this.