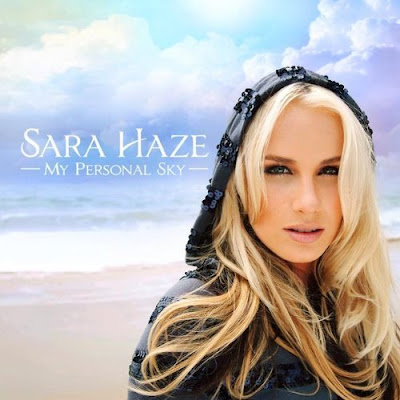 Sara Haze is a 19-year old California singer-songwriter who is wise beyond her years. A professional singer from the age of twelve, Haze has ruled stages from Canadian Music Week to SXSW to Popkomm. You might have heard Haze’s songs on shows MTV’s The Hills, and you’ll be certain to hear her from a slew of outlets over the next few years. Haze projects a distinctive authenticity; a sweet and sunny disposition underwritten by an emotional toughness built from self-confidence. These qualities come through in spades on Haze’s debut album, My Personal Sky.

My Personal Sky opens with "Beautiful Day", a highly produced pop/rock anthem about finally coming into the clear after hard times. This could be the perfect summer song both for message and feel. If "Beautiful Day" finds the right breaks this could be a huge hit for Haze. "Melt Into You" is a big-time romantic rocker that is not only another potential hit but also a likely favorite for mix tape makers. Haze shows a bit more vulnerability on "My Own Hands To Hold", and angst-filled ballad about a relationship stuck in a bad cycle. The song itself is fair, but Haze turns it into something more with a vibrant, emotionally charged but not over-the-top performance.

In order for an album to really break out and become a cornerstone recording for an artist, there has to be at least one song that could be called magical in there somewhere. Sara Haze finds that magic with "Every Heart"; rumination on all the things that make our life stories special. "Every Heart" is the sort of tune that could become the signature song of an artist over the course of a long career; one that becomes so identified with an artist that others cover it at their peril. The commercial possibilities for "Every Heart" are endless. It's a great pop number, but also has the feel of a keynote song from a Broadway show or the opening theme from a major motion picture.
Haze gives listeners a different look on "Mama", a sassy and soulful rocker that could be "R-E-S-P-E-C-T" for the modern age. Haze gives a powerful positive voice to self-respect and standing up for what you believe in a turn that's both a vibrant musical statement and a defining song as a potential role model for young women (people) everywhere. What makes "Mama" work so well is that Haze isn't trying to be like anyone else here; there's no duplicity or attempt to capture another's zeitgeist. Haze is just being herself and the rest all follows. "Lovely" is another powerful ballad with a positive message. Anyone who’s ever felt pressured by someone they love to be something they aren't will identify strongly with this tune. The licensing potential here is huge; and while the commercial radio pop of the song is low because of the tempo and arrangement, the universality of the message might be enough to overcome such things.

Haze rips though "Counterfeit Hero" with ease before jumping into "Shine"; a tune about not letting the dark times get you down. Haze implores listeners to make and be their own light in a powerfully positive song of self-actualization. Haze only seems to get distracted once on the entire album, as "The Border" just seems a bit out of synch with the rest of My Personal Sky, but recovers nicely with the rock anthem "Church Of Memories". Haze seems intent on re-iterating her support of self-actualization over faith in something else in a closer that affirms Haze's prowess as a pop songwriter and performer.

My Personal Sky, in a perfect world, would be the sort of pop/rock album that launches Sara Haze into the musical stratosphere. Haze is no plastic, singing about her beliefs in a firm voice that evokes vulnerability run through with a spine of smoky steel. It's hard to imagine My Personal Sky not making big waves on radio, television and in motion pictures. This sort of pop/rock hybrid is rare these days, and there is an appetite for such hybrids, but the shambles of commercial radio and the absolute flooding of net-based radio by anyone with a home computer and recording software makes it a bit harder for the diamonds to shine. Sarah Haze is a diamond, and My Personal Sky sparkles with the light of her sunny disposition and the strength of her songwriting and voice. Don't miss this one.

Rating: 4 Stars (Out of 5)
You can learn more about Sara Haze at http://www.sarahaze.com/ or www.myspace.com/sarahaze. You can purchase My Personal Sky on either CD or Download from Amazon.com. Downloads are also available through iTunes.
Posted by Wildy at 5:20 AM