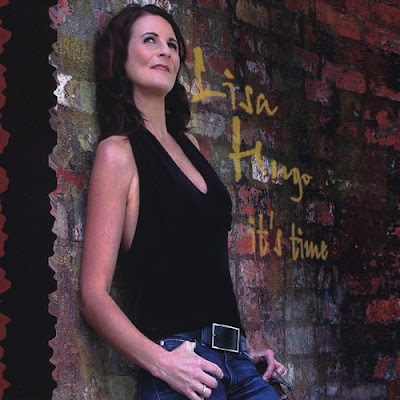 Melbourne, Australia native Lisa Hugo has pretty much done it all as an entertainer. Singer, pianist, songwriter and TV star, Hugo has performed to thousands of fans in Australia, throughout Europe, on cruise ships and in hotels all over the world, and these days in her home base of Dubai, U.A.E. On top of all of this, Hugo is a top-shelf vocal coach with a range that covers three octaves and a big sound that counters her diminutive stature. Hugo's latest album, It's Time, features Belgian musicians Dirk van der Linden (guitar/Hammond organ); Janos Bruneel (double bass) and Pieter Vandergooten (drums) across eight original tunes and three covers.

It's Time opens with "With You I Can Be Me", showcasing Hugo's wonderfully sultry alto voice perfectly. Presented in a nifty jazz/pop arrangement, the bright and airy tune contrasts well with Hugo's amber vocal hues. "Blame It On The Sun" (Stevie Wonder) is sentimental and rueful; pretty but not overly memorable. "Lovin' You" falls into the sappy end of the boat again; which would be forgivable were the energy or camp there to offset/support it. Hugo's voice is pretty here, but the energy level is flat. "Oh, My Baby" seems fit to Adult-Contemporary radio standards; a song you'd most likely here on a syndicated show like Delilah or on a mix-tape somewhere. "The Letter" (Wayne Carson Thompson, made famous by The Box Tops) is an interesting interpretation; much slower and darker than the original. This one may take you by surprise as it is initially quite alien to your pre-conception of the song, but the cover is surprisingly good and works in spite of the long history of the song. "Time Is A Healer" (Eva Cassidy) is the final cover on the album, an average take that perhaps only the hard-core Cassidy fans will have a strong opinion about one way or the other. "Please Try To Understand" features Hugo at her vocal best on a song that just isn't up to the level of the singer. Hugo closes positively with "Strong At Heart", a solid message delivered in a solitary and lovely arrangement that makes the album more memorable.

Lisa Hugo has a great voice, but the song selection and arrangements on It's Time don't always serve her well. The songwriting in general is average to slightly above; leaving Hugo to carry the songs with her voice; a feat she pulls off more often than not. Even the covers seem like they've perhaps been chosen more on the basis of personal preference rather than what fits Hugo's voice, with the exception of "The Letter", which turns out to be one of the bright spots of the experience. It's Time is a decent listen, but perhaps doesn't shine the best light on Hugo, whose voice deserves more attention than this album will garner her.

Rating: 2.5 Stars (Out of 5)
Learn more about Lisa Hugo at http://www.lisahugo.net/ or www.myspace.com/lisahugo. It's Time is available from Amazon.com as a CD or Download.
Posted by Wildy at 5:21 AM