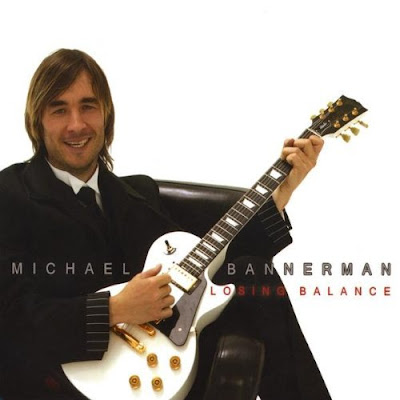 Michael Bannerman spent nearly two decades as front man for CGMA Covenant Award Winners Lost Coin, touring North America in big tour buses and playing to large appreciate crowds. In 2009, Bannerman did one of the bravest things he could; he stepped out on his own. Bannerman returned to his roots, focusing the power of his songwriting on smaller audiences as he embarked on a solo career. Bannerman’s solo debut, Losing Balance, has drawn comparisons to Tom Petty for his earnest songwriting style. Bannerman is unique in temperament, enjoying the “paying dues” time he’s encountered as a new solo artist. That joy and passion shine through on Losing Balance.

Bannerman kicks off Losing Balance with the title track, a tasty Pop/Rock love song that you can't help but want to dance to. Bannerman keeps things simple and scores big time with a melody you'll be singing/humming to yourself for days. "Julia" is a song about an emotional black widow; a woman who consumes her partners lives until there's nothing left. Once again, the chorus will capture you and refuse to let you go. "Dangerously Beautiful" is written from the perspective of a man whose greatest distraction from love is his own ability to accept his deservedness. You'll likely recognize someone you know in this song, and the straight-forward rock arrangement is pleasing to the ear.

Bannerman's cover of Cyndi Lauper's "Time After Time" hits all of the right notes, physically and virtually. The song as presented is heartfelt and reverent of the original. Bannerman takes us on a good-natured tour of his life in "The Mini-Van Song", questioning how the sixteen year old he once was became the thirty-something he is now. Both tongue-in-cheek and heartfelt, "The Mini-Van Song" is a fun listen that will strike a chord with listeners in the same age-group. Bannerman's song isn't bitter at all, but thankful for where he's wound up. Nevertheless, he still questions how he got from there to here. Bannerman is a bit more tongue-in-cheek on "I Think I'm Going Crazy (Does This Make Me Normal?)", which borders on novelty.

"I Didn't Come For The Dance" is a wonderfully coherent take on someone feeds off of conflict in their own relationships. The Latin guitar in the verse and big rock chorus make this a highly listenable treat that will get stuck in your noggin. Bannerman's cover of Curtis Mayfield's "People Get Ready" (first recorded by The Impressions) is inspired, offered in a blues-flavored rock arrangement that flows like water. On "The Things You Leave Behind", Bannerman plays with the theme that the impacts we leave behind matter more than the things we amass in our lives. The uplifting message is delivered in a buoyant rock arrangement that is its perfect complement.

Bannerman writes a love song to a parent on "One Last Time". The song sounds like it might be a goodbye to a parent, but the lyrics will get you. The emotional impact might be lessened a bit by the upbeat arrangement (the song is more one of celebration than of mourning), but if you listen close you can't help but be affected. Lightening things up a bit is "Superhero", an ode to childhood dreams that perhaps haven't quite been snuffed out by adulthood. "October Sky" follows up on "One Last Time", painting a U2-themed picture at the death of a parent without ever being explicit about it. "October Sky" underlines the redemptive power of life even in the face of such deep, personal loss. Cello and piano highlight the insecurity of anyone who's ever sung for a listening on "Is There Anybody Listening?" Bannerman manages to keep things simple while trolling the lyrical depths for gems ("It's not that I'm afraid to be alone / it's just that I'm alone and I'm afraid / and I sure could use a friend").

Losing Balance progresses out like a one-man play set to music. Michael Bannerman uses his writer's pen to expertly compartmentalize moments and emotions from his life; parsing out grief, loss, love and healing in small doses as the story calls for. Bannerman mixes serious thoughts with a healthy sense of humor and a touch for winning Rock and Pop hooks, turning Losing Balance into a listening experience you'll want to repeat. The flow and cohesion of the album are rare in a day and age where many artists manufacture single songs like processed cheese, and Bannerman's pleasant, efficient vocal style delivers each song without pretense or affect. Losing Balance certainly hasn't received the attention it deserved, as Michael Bannerman quietly put out one of the better all around efforts during 2009.

You can learn more about Michael Bannerman at http://www.michaelbannerman.com/ or www.myspace.com/michaelbannermanmusic. Losing Balance is available as either a CD or Download from CDBaby.com.
Posted by Wildy at 5:20 AM