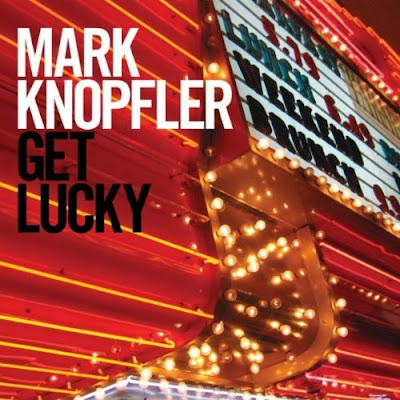 The first time I really became acquainted with Mark Knopfler as a guitar player was listening to his album of duets with Chet Atkins, Neck And Neck. I was certainly familiar with Knopfler’s work with Dire Straits, including the all-world effort Brothers In Arms, but Neck and Neck opened my eyes to Knopfler’s ability to play ridiculously difficult passages on guitar and make them look and sound like the easiest thing in the world. Knopfler, if possible, raises his game another notch on his latest album, Get Lucky; by eschewing any sort of market thinking and writing straight from the heart. The eleven songs on Get Lucky are a series of short stories and vignettes about people, places and times that may or may not be from Knopfler’s own personal history, but sound thoroughly authentic as if Knopfler is writing about people and places he’s known intimately. Knopfler will be touring the US between April 8, 2010 and May 9, 2010 in support of Get Lucky

Get Lucky opens with “Border Reiver”, a sonically gorgeous Scot/Celtic tune that holds within it a surprisingly driven tune. The reference to the land-based pirates of the Scotch/English border is an interesting one that will give you much to ponder if you’re so motivated. “Hard Shoulder” is a song of heartbreak delivered in truck driving terms. The poetry here is surprisingly subtle and is accompanied by a melancholy melody and a hopeful outlook; a truly amazing piece of songwriting. “You Can’t Beat The House” is an instant classic; a live-in-studio take that just serves to remind how amazing well-rounded and talented Knopfler is with a guitar in his hands. The musicianship of Knopfler’s entire band is off the charts here. “Before Gas And TV” returns to the Celtic themes of “Border Reiver”; mournful, reminiscent and darkly beautiful.

Knopfler pays tribute to guitar maker John Monteleone on “Monteleone”; a tune so beautiful you can’t but calling it a love ballad. Knopfler’s folk aria about a man who pours the love of his craft into every instrument he makes is a thing of beauty; the song not just an ode but a testament. “Cleaning My Gun” shows the instincts of a survivor, a veteran who has seen the wars and still feels most comfortable with a gun around. The song puts a very human face on gun owners and their motivations, miles apart from the archetypical assault rifle owner wanna-be. Knopfler brings the character in “Cleaning My Gun” fully alive without overstatement or caricature. Knopfler pays tribute to independent race car driver Bobby Brown (or at the very least his car) on “The Car Was The One”, an amazing story song that will leave you shaking your head. Knopfler’s creation has a cinematic feel, like the theme from a biopic.

On “Remembrance Day”, Knopfler looks back on the days of youth, remembering all the people who meant the world back then and the things they did together. The song opens over a game of cricket, but it could as easily be baseball here in the US. “Remembrance Day” is ripe for triteness and yet manages to miss it all together. Gorgeously arranged, Knopfler manages to be sentimental without over-playing his hand. “Get Lucky” is written from the pragmatic perspective of a blue collar worker who gives it his all every single day and keeps his eyes open for the small victories that make it seem worthwhile. The perspective is a generational one that seem to fade a bit more with each passing year, but those of you with depression or WWII era parents may recognize it in some of your older relatives. Knopfler’s character is wonderfully drawn in song. “So Far From The Clyde” is about the death of a ship and what happens to it after the fact, but is really a commentary on the fragility of life and how quickly the world moves on. Knopfler’s story-telling takes on deep undertones here and is wrapped in an amazing one-man arrangement. The song isn’t so much angst-filled as matter of fact, but it is a stark take on mortality written from the perspective of one who stares it in the face. The epilogue of the album is “Piper To The End”, which returns to the Celtic roots of the album while preparing for the final journey in life. Knopfler’s main character looks beyond this world to the next, and lays down his own terms (“When I leave this world behind me/to another I will go/If there are no pipes in heaven/I’ll be goin’ down below”). It’s a deeply personal account of one person’s reckoning about their final days upon the earth, a goose-bump inducing thing of beauty that ranks among Knopfler’s finest compositions.

To put it in simple terms, Get Lucky is brilliant. If this were the last thing Mark Knopfler ever wrote or released it would be acknowledged that he went out at the height of his powers, but it’s clear that Knopfler, like a fine wine, keeps getting better with age. Get Lucky is pleasing from the perspective of songwriting and musicianship, but it’s the subtlety and grace of Knopfler’s story-telling that raise this from being just another good Mark Knopfler album to a crown jewel in a storied career that finds Knopfler continuing to grow and perfect his craft at an age when many recording artists are mailing it in with their umpteenth reunion tour. Get Lucky can be nothing short of a Wildy’s World Certified Desert Island Disc. Knopfler will be touring the US in support of Get Lucky between April 8th and May 9th of 2010 before returning for dates in Europe. Don’t miss this opportunity see a master craftsman at work.

You can learn more about Mark Knopfler at http://www.markknopfler.com/. Get Lucky is available as either a CD or Download from Amazon.com. Check Knopfler's tour page to see if he's coming to a town near you. The tickets are a bit pricey at most venues, but it's worth it to see a master craftsman at the height of his art.
Posted by Wildy at 6:50 AM